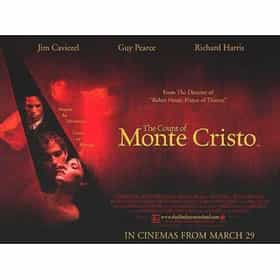 The Count of Monte Cristo

The Count of Monte Cristo is a 2002 adventure film directed by Kevin Reynolds. The film is an adaptation of the book of the same name by Alexandre Dumas, père and stars Jim Caviezel, Guy Pearce, and Richard Harris. It follows the general plot of the novel; but many aspects, including the relationships between major characters and the ending, have been changed, simplified, or removed; and action scenes have been added. The movie met with modest box office success. ... more on Wikipedia

The Count of Monte Cristo is ranked on...

#45 of 363 The Best Movies Based On Books 143k VOTES List of the best movies based off books, voted on by cine-bibliophiles everywhere. Many movies are based off of books but wh...
#546 of 1,699 The Most Rewatchable Movies 3.5M VOTES There are some movies that I always stop at and watch if I see them on TV or I can put in the DVD player and watch when I'm ...
#375 of 6,106 The Best Movies Of All Time 5.7M VOTES These are the best movies of all time, ranked by movie experts and film fans alike. What are the greatest movies in cinema h...
#381 of 599 The Greatest Epic Movies Ever Made 288.1k VOTES Need some movie ideas? Check out this list of the best epic films of all time, which encompasses some of the best movie...
#304 of 410 The Best Rainy Day Movies 178.7k VOTES For many, rainy days are no fun—but it doesn't have to be that way. A great way to spend such days is watching movies, ...
#179 of 581 The Greatest Film Scores of All Time 231.9k VOTES This list contains greatest movie themes and scores ever recorded, chosen by the Ranker community. (NOTE: This list is for f...
#85 of 551 The Best Movies of the 2000s 73k VOTES List of the best films released between the years 2000 and 2009, the era frequently referred to as the '00s or the "aug...
#25 of 211 The Best Adventure Movies 77.3k VOTES List of adventure movies. What are the best adventure movies? If you're a thrill-seeking, adrenaline-obsessed movie-goer, th...
#28 of 78 The Best Period Romance Movies 8.3k VOTES There's just something swoon-worthy about period pieces. Maybe it's the star-crossed love in these stories that wins over ...
#16 of 30 Movies Based On Books You Should Have Read In 7th Grade 557 VOTES Here is a list of all the movies based on books that you might have or should have read while in the seventh grade. Some of ...
#116 of 260 The Best PG-13 Action Movies 55.1k VOTES A list of PG-13 action movies, ranked from best to worst with movie trailers or clips when available. These action movies ar...
#67 of 160 The Best Costume Drama Movies 2.9k VOTES A list of the best costume drama movies ever made, ranked by film fans' votes -- many of which are streaming on Netflix or A...
#6 of 97 The Very Best Shows & Movies About Revenge 585 VOTES They say revenge is a dish best served cold, but that's not the only saying about revenge. Another is that if you plan on se...
#4 of 39 The Best Guy Pearce Movies 1.3k VOTES List of the best Guy Pearce movies, ranked best to worst with movie trailers when available. Guy Pearce's highest grossing m...
#7 of 54 The Best Movies About Redemption 3.5k VOTES Some of the most beloved movies of all time feature the theme of redemption. These are the stories that motivate us to hold ...
#7 of 15 Best Knife Fight Scenes in Movies 109 VOTES We compiled the best knife fight scenes in movies. From Hollywood action movies to foreign films, the greatest fight scenes ...
#42 of 226 The Best PG-13 Thriller Movies 4.8k VOTES List of PG-13 thriller movies, ranked from best to worst with movie trailers when available. This list takes the best PG-13 ...
#5 of 50 The Best Thriller Movies of 2002 297 VOTES List of the best 2002 thriller movies, ranked by how many upvotes they've received by other fans of the genre. These thrille...

The Count of Monte Cristo is also found on...