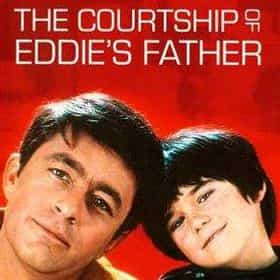 The Courtship of Eddie's Father

The Courtship of Eddie's Father is an American television sitcom based on the 1963 movie of the same name, which was based on the book written by Mark Toby. It tells the story of a widower, Tom Corbett, who is a magazine publisher, and his son, Eddie, who believes his father should marry, and manipulates situations surrounding the women his father is interested in. ABC had acquired the rights to the story; the series debuted on September 17, 1969, and was last broadcast on March 1, 1972. Bixby received an Emmy nomination for the show. ... more on Wikipedia

The Courtship of Eddie's Father is ranked on...

#606 of 2,297 The Greatest TV Shows Of All Time 1.5M VOTES Choosing the best TV shows of all time means taking into account the best TV dramas, the best TV comedies, the best cartoons...
#179 of 590 People who voted for The Courtship of Eddie's Father... also upvote Star Trek Franchise on The Best Alien Movies Ever Made also upvote Star Trek Franchise on The Best Space Movies The Best TV Theme Songs of All Time 323.9k VOTES The best TV theme songs and TV intros of all time will take you back to some of the greatest moments in TV. Television theme...
#135 of 204 The Most Important TV Sitcoms 82.7k VOTES These sitcoms are important because they either influenced a generation's culture or because they permanently influenced the...
#423 of 510 The Best '80s TV Shows 211.1k VOTES List of the best television shows from the '80s, as ranked by television fans. In the 1980s, sitcoms were among the most tal...
#58 of 199 The Best Metro-Goldwyn-Mayer Movies List 4.4k VOTES List of Metro-Goldwyn-Mayer movies, ranked best to worst, including trailers, genres, and release dates. Metro-Goldwyn-Mayer...
#48 of 105 The Best Comedy-Drama TV Shows Ever 20.1k VOTES The best comedy-drama TV shows, also known as dramadies, provide not only laughs but also heartfelt storylines. They have be...

The Courtship of Eddie's Father is also found on...