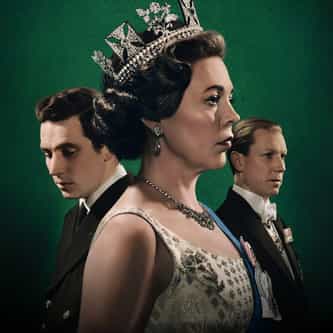 The Crown (Netflix, 2016) is an American-British biographical drama series created by Peter Morgan. A young Queen Elizabeth II's (Claire Foy) political rivalries and romances guide the events that would shape the second half of the twentieth century. ... more on Wikipedia

lists about The Crown

28.2k readers A Complete Timeline Of Events That Led To Elizabeth II Becoming Queen - When She Wasn't Supposed To

24.6k readers Princess Alice of Battenberg's Real Life Was Even More Dramatic Than What You Saw On 'The Crown'

308.7k readers 13 Scandalous Facts About Wallis Simpson, the Woman Who Seduced a King

33.5k readers The True Story Of The Aberfan Disaster, Featured In Season 3 Of 'The Crown'

85.4k readers Did Prince Philip Cheat On Queen Elizabeth Like 'The Crown' Says He Did?

13.8k readers All About Princess Margaret’s Real 1965 Rager Of A Diplomatic Trip To The US

15.2k readers Did Queen Elizabeth II Cheat On Prince Philip Like 'The Crown' Says She Did?

9.2k readers Wardrobe Secrets From Behind The Scenes Of 'The Crown'

918 votes What to Watch If You Love 'The Crown'

4.9k readers The Real Story Behind The KGB Spy Who Infiltrated Buckingham Palace As An Art Historian

310.7k readers Here's Everything The Crown Just Got Straight-Up Wrong About History

513.5k readers Here Are All The Real-Life Historical Figures Placed Side-By-Side With Their Scenes From "The Crown"

239 votes The Best Characters On 'The Crown', Ranked

1.6k votes The Best Episodes of 'The Crown'

The Crown IS LISTED ON