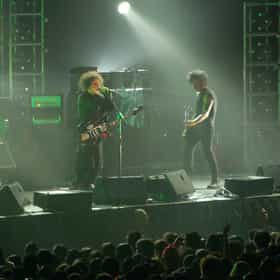 The Cure is an English rock band formed in Crawley, West Sussex in 1976. The band members have changed several times, with guitarist, lead vocalist, and songwriter Robert Smith the only constant member. The band's debut album was Three Imaginary Boys (1979) and this, along with several early singles, placed the band in the post-punk and new wave movements that had sprung up in the wake of the punk rock revolution in the United Kingdom. During the early 1980s the band's increasingly dark and tormented music, as well as Smith's stage look, was a staple of the emerging style of music known as gothic rock. ... more on Wikipedia

lists about The Cure

A Timeline Of Robert Smith's Beef With Morrissey 1.2k views Morrissey is no stranger to feuds. The Pope of Mope has no problem throwing hostile quips about some of his least favorite t...
The Best Cure Albums of All Time 2.8k votes The Cure are considered to be many things, like one of the best pop artists of the 80s, greatest punk bands of all time, and...
Behind The Scenes Of 'Disintegration', The Cure's Dark And Brooding Masterpiece 882 views In 2019, Robert Smith began to speak publicly about The Cure's first new album in 11 years, Live From the Moon. As the famou...

The Cure is ranked on...

#20 of 502 People who voted for The Cure... People on the West Coast are 2x more likely to vote for this The Greatest Musical Artists of the '80s 576.7k VOTES   The greatest and most prolific artists of music's most colorful decade are remembered on this list. This list is ba...
#17 of 284 People who voted for The Cure... People on the West Coast are 2x more likely to vote for this Musicians Who Belong in the Rock and Roll Hall of Fame 428.4k VOTES Update: the Rock and Roll Hall of Fame has listened to your feedback and inducted a number of artists on this list sinc...
#91 of 2,211 People who voted for The Cure... also upvote Nevermind on The Greatest Albums of All Time The Best Rock Bands of All Time 3.3M VOTES Update: Follow Ranker's official New Rock 2020 playlist on Spotify! There are thousands of rock bands that have ...
#301 of 2,179 The Greatest Musical Artists of All Time 13.4M VOTES When VH1 polled fellow artists to name the greatest artists of all time, it seemed like a good idea---but in reality, the li...
#86 of 133 Bands Or Artists With Five Great Albums 27.8k VOTES Building a successful band is tough but keeping it going is much tougher. Even some of history's biggest, best-selling ...
#40 of 409 The Greatest Musical Artists of the '90s 1M VOTES   Take a big whiff- "mmmbop", it smells like the '90s in here! An incredibly eclectic decade for music, the...
#507 of 561 The Most Hipster Bands 178.9k VOTES Since the mid-2000s, the word hipster has invaded the lexicon of pop culture and has become a term, for better or worse, syn...
#19 of 115 The Best Musical Trios Of All-Time 35.7k VOTES Across all types of music what is the best 3 piece band ever? Add your own favorite band...heck even country works... countr...
#7 of 15 Rock and Roll Hall of Fame Nominees 2012 1.1k VOTES Rock and Roll Hall of Fame nominees in 2012 include well-known artists and bands in the music industry. Several different ge...
#29 of 72 Musicians You Most Wish Would Put Out A Christmas Album 3.5k VOTES It's the most wonderful time of the year: Christmas. Nothing beats sipping hot cocoa next to the fire, jamming out to your f...
#2 of 676 The Best Alternative Bands/Artists 201.3k VOTES At the end of the 1980s, at the peak of glam rock and hair metal, a new genre began to emerge from the underground. Since it...
#4 of 99 The Best College Rock Bands/Artists 7.4k VOTES Popular in the 1980s and 1990s, college rock bands were some of the first alternative rock bands before the genre shot to pr...
#2 of 199 The Best Darkwave Bands/Artists 13.1k VOTES With its origins beginning in the 1970s, darkwave took post-punk and New Wave and added dark introspective lyrics that diffe...
#2 of 369 The Best Gothic Rock Bands/Artists 37k VOTES Blending elements of post-punk and alternative rock, the best gothic rock bands are some the best known rock bands, albeit s...
#2 of 88 The Best Post-punk Bands 15.9k VOTES Emerging following the punk rock explosion, post punk-bands was a response to that initial movement. Known as a bit more exp...
Superstar Bands That Actually Formed in High School 17.8k VIEWS High school bands are nothing new—jamming in the garage after class is a classic teenage pastime. Only a handful of bands fo...
#68 of 165 The Best Musicians Who Performed on SNL In The '90s 862 VOTES The 1990s were a period of transition and change for Saturday Night Live, but they carried through and started the new mille...
I Saw 100+ Bands In 2019 And Ranked Them 3.9k VIEWS Back in 2015, I unintentionally saw over 100 bands, triggering my inner ranking compulsion. My completist gene also cam...

The Cure is also found on...