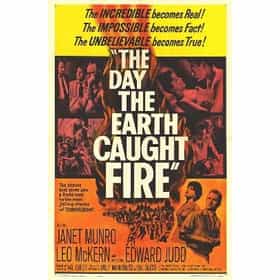 The Day the Earth Caught Fire

The Day the Earth Caught Fire is a British science fiction disaster film starring Edward Judd, Leo McKern and Janet Munro. It was directed by Val Guest and released in 1961, and is one of the classic apocalyptic films of its era. The film opened at the Odeon Marble Arch in London on 23 November 1961. The film, which was partly made on location in London and Brighton, used matte painting to create images of abandoned cities and desolate landscapes. The production also featured the real Daily Express, even using the paper's own headquarters, the Daily Express Building in Fleet Street, London. ... more on Wikipedia

The Day the Earth Caught Fire is ranked on...

#247 of 569 The Greatest Disaster Movies of All Time 95.7k VOTES These are the most entertaining, the most fun, the greatest disaster movies ever made, ranked by movie experts and film fans...
#70 of 108 The 25+ Best Michael Caine Movies of All Time, Ranked 8.1k VOTES The best Michael Caine movies of all time prove that he’s one of the top actors of his generation. Since the ‘50s, Caine has...
#24 of 87 The Best Sci-Fi Movies of the 1960s 5.8k VOTES The 1960s was an important decade in the development of the science fiction genre. Several major releases helped redefine sc...
#32 of 112 The Best Movies of 1961 2.2k VOTES List of the best movies of 1961, with movie trailers when available. 1961 saw the debut of many historic actors, including...
#33 of 34 The Best Sci-Fi Disaster Movies 817 VOTES Science fiction disaster films are endlessly fun to watch. For some reason, people enjoy seeing stories about massive threat...
#11 of 18 The Best '60s Disaster Movies 23 VOTES These are the best disaster movies from the ‘60s. Disaster films can impact the whole world a select group of people such as...

The Day the Earth Caught Fire is also found on...