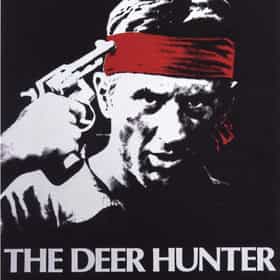 The Deer Hunter is a 1978 American epic drama film co-written and directed by Michael Cimino about a trio of Russian American steelworkers and their service in Vietnam. The film stars Robert De Niro, Christopher Walken, John Savage, John Cazale, Meryl Streep, and George Dzundza. The story takes place in Clairton, a small working class town on the Monongahela River south of Pittsburgh and then in Vietnam, somewhere in the woodland and in Saigon, during Vietnam. The film was based in part on an unproduced screenplay called The Man Who Came to Play by Louis Garfinkle and Quinn K. Redeker about Las Vegas and Russian roulette. ... more on Wikipedia

Unbelievable Stories From Behind The Scenes Of 'The Deer Hunter' 77k views While Apocalypse Now is better known today for its agonizing production process, Michael Cimino's 1978 Vietnam War epic The ...
The Best Quotes From The Deer Hunter 83 votes The best The Deer Hunter quotes make you realize how great the movie really is, even if you haven't seen it in a while. Let'...

The Deer Hunter is ranked on...

The Deer Hunter is also found on...