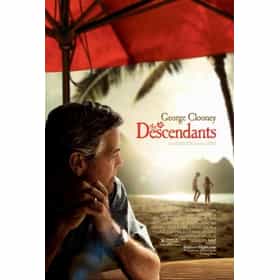 The Descendants is a 2011 American drama film directed by Alexander Payne. The screenplay by Payne, Nat Faxon and Jim Rash is based on the novel of the same name by Kaui Hart Hemmings. The film stars George Clooney, Shailene Woodley, Beau Bridges, Judy Greer, Matthew Lillard and Robert Forster, and was released by Fox Searchlight Pictures in the United States on November 18, 2011 after being screened at the 2011 Toronto International Film Festival. Tracing the journey of land baron Matt King who struggles with unexpected occurrences in his monotonous life, The Descendants was released to positive reviews from critics and won an Academy Award for Best Adapted Screenplay, as well as two ... more on Wikipedia

lists about The Descendants

The Descendants Movie Quotes 195 votes 'The Descendants' movie quotes represent the best lines from this 2011 comedy/drama starring George Clooney as Matt King, a ...

The Descendants is ranked on...

The Descendants is also found on...

Movies with Cinematography by Phedon Papamichael