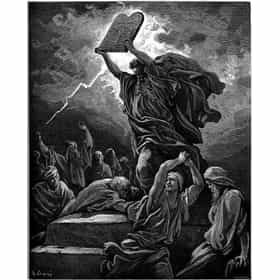 The Devil and the Ten Commandments

Le Diable et les Dix Commandements, is a French comedy-drama film from 1963, directed by Julien Duvivier, written by David Alexander and Michel Audiard, starring Michel Simon and Louis de Funès. The cast list includes several famous French actors: Simon, de Funès, Fernandel, Danielle Darrieux, Lino Ventura, Jean-Claude Brialy, Charles Aznavour and a very young Alain Delon. According to Bosley Crowther only one from seven episodes tickled him, in which play Louis de Funes and Jean-Claude Brialy. The film offers a perspective on sin and salvation. A snake proclaims – voice of Claude Rich – that it is our old friend, the Devil. ... more on Wikipedia

The Devil and the Ten Commandments is ranked on...

The Devil and the Ten Commandments is also found on...