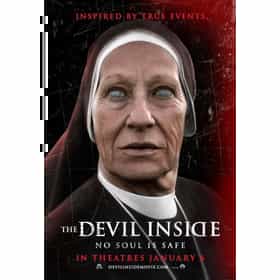 The Devil Inside is a 2012 American supernatural horror film directed by William Brent Bell, and written by Bell and Matthew Peterman. It is a documentary-style film about a woman who becomes involved in a series of exorcisms during her quest to determine what happened to her mother, a woman who murdered three people as a result of being possessed by a demon. Produced by Peterman and Morris Paulson, the film stars Fernanda Andrade, Simon Quarterman, Evan Helmuth, and Suzan Crowley, and was released theatrically on January 6. It is sometimes cited as one of the worst horror films ever made. The film topped the US box office on its opening weekend, yet dropped drastically in the second ... more on Wikipedia

The Devil Inside is ranked on...

#380 of 769 People who voted for The Devil Inside... are 4x more likely to vote for A Nightmare on Elm Street Franchise on this list The Best Horror Movies of All Time 1M VOTES Horror movies, ranked by adrenaline junkies worldwide. Anyone can vote on this CrowdRanked list, and can even add your own f...
#159 of 183 The Best Movies of 2012 17.3k VOTES This is a list of the best movies of 2012, as ranked by experts and fans alike. The best movies of 2012 include gut-wrenchin...
#10 of 94 The Worst January Movie Releases 40.9k VOTES If you're an actor, director or producer, the last thing you want is your movie to be released in the January dumping ground...
#12 of 63 The Worst Movies of 2012 4.7k VOTES The worst movies if 2012 include the least watchable, most disappointing and painfully awful films released during the year....
#209 of 215 The Best Paramount Pictures Movies List 6.6k VOTES List of Paramount Pictures movies, ranked from best to worst, including trailers, genres, and release dates. Paramount Pictu...
#16 of 39 The Best Horror Movies of 2012 4.4k VOTES The best horror movies of 2012 managed to scare the daylights out of movie goers and keep them enthralled with tales of terr...

The Devil Inside is also found on...