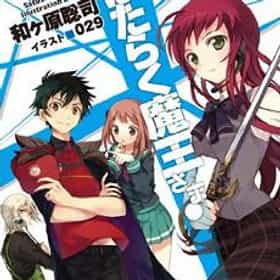 The Devil Is a Part-Timer!

The Devil Is a Part-Timer! is a Japanese light novel series written by Satoshi Wagahara, with illustrations by Oniku. ASCII Media Works has published ten volumes since February 2011. The story is about a demon king named Satan seeking to conquer the world of Ente Isla but, when confronted by the Hero Emilia Justina, is forced to retreat through a portal that transports him to modern day Tokyo, Japan. To survive and find a way to return to Ente Isla, Satan gains part-time employment at a fast food restaurant. There have been two manga adaptations published by ASCII Media Works in Dengeki Daioh and Dengeki Maoh. A 13-episode anime adaptation produced by White Fox and directed by Naoto ... more on Wikipedia

The Devil Is a Part-Timer! is ranked on...

#10 of 846 The Best Anime Series of All Time 5.9M VOTES You love anime but what tops this list of the best anime series ever made? Top anime series include shows like Death Note, A...
#59 of 185 The Best Action Anime of All Time 664.1k VOTES Action anime is hard to define, but if a show has car chases and epic battles, then it probably fits the genre's descri...
#13 of 81 The 30+ Best Anime for Teens 94.2k VOTES You might think that all anime is good for teens to watch, but there are some very sexual and violent series out there that ...
#6 of 131 The Best Supernatural Anime 159.2k VOTES Do you have a taste for the supernatural when you watch anime? There's nothing wrong with that. In fact plenty of anime seri...
#14 of 41 The 24+ Best Ecchi Comedy Anime of All Time 48.5k VOTES What is the funniest ecchi anime of all time? We're letting the crowd decide with this ranked list of the best ecchi comedy ...
#8 of 114 The Funniest Anime Shows Ever Made 187.8k VOTES List of the funniest anime of all time, as voted on by the Ranker anime community. Although many great animes have comedy el...
#14 of 59 The Best Anime to Watch While You're Stoned 31.8k VOTES If you're an anime fan who tokes, you're probably looking for some good anime to watch while stoned. This list ranks some of...
#1 of 13 13 Times Religious Figures Showed Up in Anime As Amazing Characters 1.7k VOTES While religious figures in anime aren't exactly common, they have shown up in some truly strange places. You might expect to...
#52 of 76 The Best Anime To Watch While Working Out 2k VOTES Believe it or not, there are many of us who watch anime while we exercise! For that reason, let's take a look at some great ...
#238 of 1,328 The Best Guilty Pleasure TV Shows 19.7k VOTES List of the best guilty pleasure TV shows, past and present, including sitcoms, dramas, reality shows, and game shows. These...
#4 of 30 The Best Anime Like Kaze No Stigma 1.6k VOTES Need some Kaze No Stigma anime recommendations? Since it's such an influential series, let's rank the best anime l...