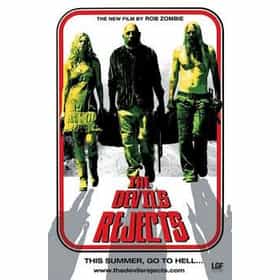 The Devil's Rejects is a 2005 American horror film written and directed by Rob Zombie, and the sequel to his 2003 film House of 1000 Corpses. The film is centered on the run of three members of the psychopathic antagonist family from the previous film, now seen as antiheroic protagonists, with Sid Haig, Bill Moseley and Zombie's wife Sheri Moon Zombie reprising their roles. At the time of its release and in the years since, the film has garnered a cult following. This is the final film of Matthew McGrorythe film and is dedicated to his "loving memory". ... more on Wikipedia

lists about The Devil's Rejects

The Devil's Rejects is ranked on...

The Devil's Rejects is also found on...