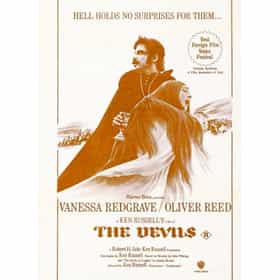 The Devils is a 1971 British historical drama horror film directed by Ken Russell and starring Oliver Reed and Vanessa Redgrave. Russell's screenplay is based partially on the 1952 book The Devils of Loudun by Aldous Huxley, and partially on the 1960 play The Devils by John Whiting, also based on Huxley's book. The film is a dramatised historical account of the rise and fall of Urbain Grandier, a 17th-century Roman Catholic priest executed for witchcraft following the supposed possessions in Loudun, France. Reed plays Grandier in the film and Vanessa Redgrave plays a sexually repressed nun who finds herself inadvertently responsible for the accusations. The film faced harsh reaction ... more on Wikipedia

The Devils is ranked on...

The Devils is also found on...