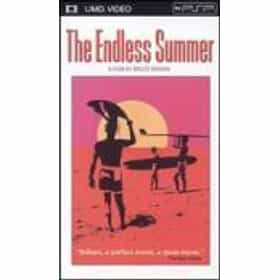 The Endless Summer is a seminal 1966 surf movie. Filmmaker/narrator Bruce Brown follows two surfers, Mike Hynson and Robert August, on a surfing trip around the world. Despite the balmy climate of their native California, cold ocean currents make local beaches inhospitable during the winter. They, with Rodney Sumpter and Nat Young, travel to the coasts of Australia, New Zealand, South Africa, Tahiti and Hawaii in a quest for new surf spots and introduce locals to the sport. Other important surfers of the time, such as Miki Dora, Phil Edwards and Butch Van Artsdalen, also appear. Its title comes from the idea, expressed at both the beginning and end of the film, that if one had enough ... more on Wikipedia

The Endless Summer is ranked on...

#14 of 25 Great Movies Set on the Beach 592 VOTES Blue skies and golden sand make the beach an ideal location to spent a few hours - even at the movies. Some top beach m...
#58 of 69 The Best Movies About Summer 12.4k VOTES It’s summertime – the feeling is easy, it's the perfect temperature, time is spent laying on the beach all afternoon, follow...
#3 of 51 People who voted for The Endless Summer... are 7x more likely to vote for Chasing Mavericks on this list The Best Surf Movies 5.5k VOTES A list of the best surf movies, including documentaries about surfing, narrative surf films, and beach party movies. Beach P...
#31 of 34 The Best Movies for Athletes to Watch 660 VOTES There's something about a good sports movie that really gets the juices pumping. From inspirational sports movie&n...
#2 of 27 Catch A Wave With The Best Documentaries About Surfing 90 VOTES The greatest surfing documentaries can be enjoyed by people who avoid water just as much as those who can't wait to catch th...
#12 of 45 The Best Documentaries About Traveling 348 VOTES Who doesn’t daydream about travelling around the world in search of the most beautiful places imaginable? Nothing is a bette...
#4 of 20 The Best Documentaries To Watch Stoned 272 VOTES Indulging in marijuana can leave you a little more interested in the world than usual, which may lead you to wonder what to ...

The Endless Summer is also found on...