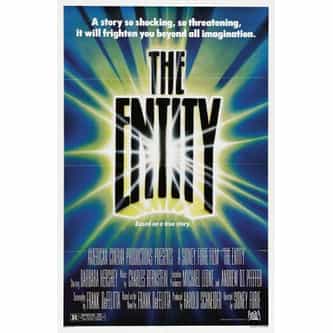 Tagline
Based on a true story....that isn't over yet.
There is no escape from something you cannot see
Something evil is after Carla Moran
and it will stop at nothing to get her.

The Entity is a horror film based on the novel of the same name by Frank De Felitta. It stars Barbara Hershey as a woman tormented by an invisible assailant. Despite being filmed and planned for a release in 1981, the movie was not released in worldwide theaters until September 1982 followed by the United States in February 1983. ... more on Wikipedia

The Entity IS LISTED ON