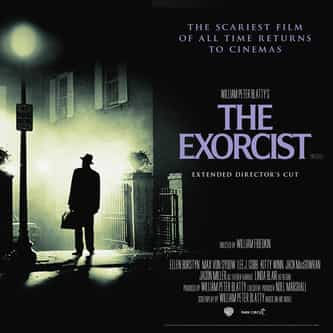 Tagline
Something beyond comprehension is happening to a little girl on this street
in this house. A man has been called for as a last resort to try and save her. That man is The Exorcist.

Prequel
Dominion: Prequel to the Exorcist
Exorcist: The Beginning

The Exorcist is a 1973 American supernatural horror film directed by William Friedkin, adapted by William Peter Blatty from his 1971 novel of the same name. The book, inspired by the 1949 exorcism case of Roland Doe, deals with the demonic possession of a 12-year-old girl and her mother's desperate attempts to win back her child through an exorcism conducted by two priests. The film features Ellen Burstyn, Max von Sydow, Jason Miller, Linda Blair, Lee J. Cobb, and Mercedes McCambridge. It ... more on Wikipedia

37.1k readers Did A Malevolent Spirit Actually Curse 'The Exorcist' From The Get-Go?

301.3k readers 16 Wild Behind the Scenes Facts About 'The Exorcist'

1.7k readers What Reviewers Said About 'The Exorcist' When It Was Released

The Exorcist IS LISTED ON