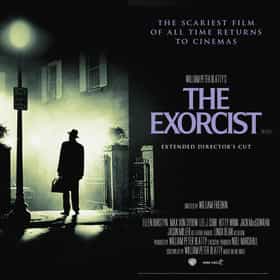 The Exorcist is a 1973 American supernatural horror film directed by William Friedkin, adapted by William Peter Blatty from his 1971 novel of the same name. The book, inspired by the 1949 exorcism case of Roland Doe, deals with the demonic possession of a 12-year-old girl and her mother's desperate attempts to win back her child through an exorcism conducted by two priests. The film features Ellen Burstyn, Max von Sydow, Jason Miller, Linda Blair, Lee J. Cobb, and Mercedes McCambridge. It is one of a cycle of "demonic child" films produced from the late 1960s to the mid-1970s, including Rosemary's Baby and The Omen. The Exorcist was released theatrically in the United States ... more on Wikipedia

Did A Malevolent Spirit Actually Curse 'The Exorcist' From The Get-Go? 37.1k views How do you make a classic horror movie even scarier? With a classic curse, of course! From Superman to The Crow, many a Holl...
16 Wild Behind the Scenes Facts About 'The Exorcist' 301.1k views When The Exorcist opened in 1973, people were fainting and vomiting in the aisles. The story of an innocent girl possessed b...
What Reviewers Said About 'The Exorcist' When It Was Released 1.7k views Most fans of the genre count The Exorcist among the greatest horror films of all time, and with good reason. Since its relea...

The Exorcist is ranked on...

The Exorcist is also found on...