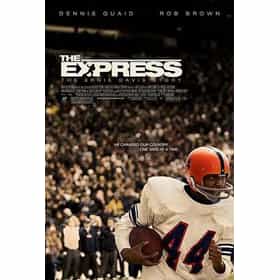 The Express is a 2008 American sports film produced by John Davis and directed by Gary Fleder. The storyline was conceived from a screenplay written by Charles Leavitt from a book titled Ernie Davis: The Elmira Express, authored by Robert C. Gallagher. The film is based on the life of Syracuse University football player Ernie Davis, the first African American to win the Heisman Trophy, portrayed by actor Rob Brown. The Express explores civil topics, such as racism, discrimination and athletics. The motion picture was a co-production between the film studios of Relativity Media and Davis Entertainment. It was commercially distributed by Universal Pictures theatrically, and by Universal ... more on Wikipedia

The Express is ranked on...

The Express is also found on...