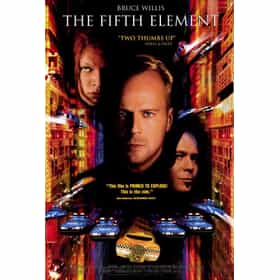 The Fifth Element is a 1997 English-language French science fiction action film directed and co-written by Luc Besson. It stars Bruce Willis, Gary Oldman and Milla Jovovich. Mostly set in the 23rd century, the film's central plot involves the survival of planet Earth, which becomes the responsibility of Korben Dallas, a taxicab driver and former major, after a young woman falls into his cab. Dallas joins forces with her to recover four mystical stones essential for the defence of Earth against an impending attack. Besson started writing the story that became The Fifth Element when he was 16 years old; he was 38 when the film opened in cinemas. ... more on Wikipedia

Things You Still Don't Know About 'The Fifth Element,' Even After Watching It 500 Times On Cable 418.3k views Two decades after it was released in theaters, it goes without saying that The Fifth Element is one of the greatest science ...
Wardrobe Secrets From Behind The Scenes Of 'The Fifth Element' 7.6k views Luc Besson's sci-fi gem The Fifth Element debuted at the 1997 Cannes Film Festival. Imbuing the movie with splashes of color...

The Fifth Element is ranked on...

The Fifth Element is also found on...