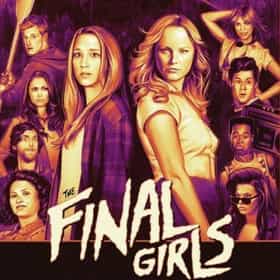 The Final Girls is a 2015 American slasher comedy film directed by Todd Strauss-Schulson. Max Cartwright (Taissa Farmiga)'s mother was scream queen Nancy (Malin Åkerman), who starred in the 1986 slasher film Camp Bloodbath, now a cult classic. When a theater screening the film catches fire, Max and her friends find themselves transported to 1986 and face to face with Nancy, her co-stars, and the real killer behind Camp Bloodbath. ... more on Wikipedia

The Final Girls is ranked on...

#456 of 804 The Best Horror Movies Of All Time 1.1M VOTES Horror movies, ranked by adrenaline junkies worldwide. Anyone can vote on this CrowdRanked list, and can even add your own f...
#9 of 14 The Most Underrated Horror Films Of The Last 10 Years 1k VOTES Plenty of horror movies have come out in the last decade, but not all of them get the attention that they deserve. Sure, the...
#102 of 120 The Best College Movies Ever 18.4k VOTES Any true college student should watch each of these college movies at least once. However we recommend watching each movie s...
#55 of 120 The Best New Horror Movies of the Last Few Years 37.8k VOTES The best new horror films find a lot of different ways to scare audiences. They offer ghosts, witchcraft, creepy clowns, spa...
#52 of 71 The Best New Teen Movies of the Last Few Years 12.4k VOTES Teen movies are a longtime staple of many viewers' cinematic diet, but the best new teen films really raise the bar. The gen...
#67 of 182 The Best Comedy Horror Movies, Ranked 31.3k VOTES Funny horror movies! This is a list list of some of the best comedy horror movies ever made, or horror comedies. Either way ...
#74 of 100 The Funniest Horror Movies Ever Made 52.1k VOTES There’s nothing better than a ridiculous comedy horror movie. Whether it’s for a date night or just a timekiller, the funnie...
#26 of 41 The Best Indie Horror Movies, Ranked 2k VOTES This list contains information on the best indie horror movies, ranked from best to worst by user votes. The best indie horr...
Feel-Good Horror Movies To Watch During Difficult Times 329 VIEWS You know those movies that you can put on and not worry about whether or not you’re going to feel an existential emptiness w...