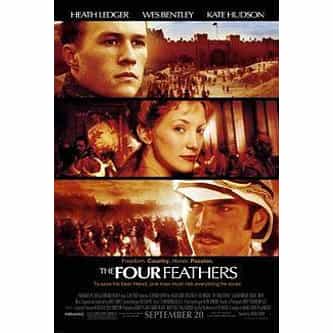 The Four Feathers is a 2002 action drama film directed by Shekhar Kapur, starring Heath Ledger, Wes Bentley, Djimon Hounsou and Kate Hudson. Set during the British Army's Gordon Relief Expedition in Sudan, it tells the story of a young man accused of cowardice. This film, with altered plot events, is the latest in a long line of cinematic adaptations of the 1902 novel The Four Feathers by A.E.W. Mason. Other versions of the story have been set in the 1890s, with different battle events. ... more on Wikipedia

The Four Feathers IS LISTED ON