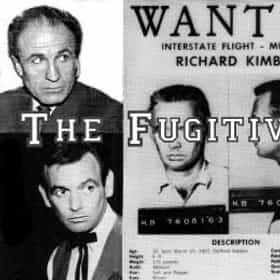 This film is an American drama series created by Roy Huggins and produced by QM Productions and United Artists Television that aired on ABC from 1963 to 1967. David Janssen stars as Richard Kimble, a physician who is falsely convicted and sentenced to receive the worst penalty. Kimble's train derails over a switch, allowing him to escape and begin a cross-country search for the real killer, a "one-armed man". At the same time, Dr. Kimble is hounded by the authorities, most notably dogged by Police Lieutenant Philip Gerard. ... more on Wikipedia

The Fugitive is ranked on...

#377 of 802 The Best TV Shows To Binge Watch 1.2M VOTES Bored? Not anymore! These are the best TV shows for binge-watching. The greatest television shows in the world are ranked he...
#194 of 216 The TV Shows with the Best Writing 68.8k VOTES What are the best written TV shows of all time? The Writers Guild of America (WGA) and TV Guide recently compiled its list o...
#87 of 263 People who voted for The Fugitive... People over 50 are 2x more likely to vote for this The Greatest TV Dramas of All Time 166.9k VOTES The greatest TV dramas of all time are the ones that make you feel connected to characters you will never meet in real life ...
#9 of 41 The Best Emmy Winning Dramatic Series 3.9k VOTES Each year, the big prize at the Primetime Emmys goes to the best drama series on television - the award for Outstanding Dram...
#26 of 247 People who voted for The Fugitive... also upvote James Bond Franchise on Every James Bond Movie, Ranked Best to Worst The Very Best Shows That Aired in the 1960s 97k VOTES List of the best television programs from the 1960s, as ranked by television fans. It was in the 60s that television first b...
#59 of 151 The Best Action-Adventure TV Shows 39.9k VOTES The very best action/adventure shows on television, ranked from best to worst. This list of the greatest in your face explos...
#1 of 34 The Greatest Dramas of the 1960s 1.3k VOTES Television dramas really got their start in the 1960s. Although there were a few dramatic programs in the 1950s, they didn...
#4 of 62 The Best 1960s ABC Shows 2k VOTES The '60s were the heyday of network TV, and as this list of 1960s ABC shows makes clear, many of the most popular series of ...
#4 of 30 The Best 1960s Adventure TV Series 963 VOTES These are the best 1960s adventure TV series, ranked from best to worst by user votes. From great 60s adventure shows were c...

The Fugitive is also found on...