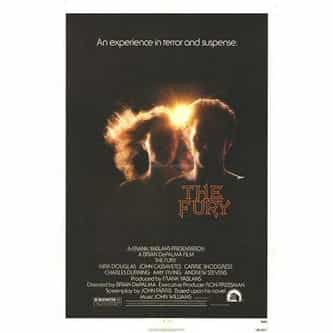 Tagline
An experience in terror and suspense.

The Fury is a 1978 supernatural thriller film directed by Brian De Palma. The film was written by John Farris, based on his novel of the same name. It starred Kirk Douglas, John Cassavetes, Carrie Snodgress, Amy Irving, Charles Durning and Andrew Stevens. The music, composed by Academy Award-winner John Williams and performed by the London Symphony Orchestra, was highly praised by critic Pauline Kael, who called it "as elegant and delicately varied a score as any horror film has ever ... more on Wikipedia

The Fury IS LISTED ON