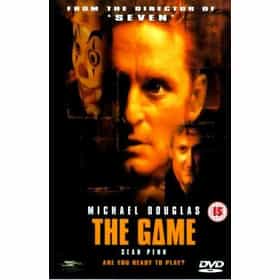 The Game is a 1997 American mystery thriller film directed by David Fincher, starring Michael Douglas and Sean Penn, and produced by Propaganda Films and PolyGram Filmed Entertainment. It tells the story of a wealthy investment banker who is given a mysterious gift: participation in a game that integrates in strange ways with his everyday life. As the lines between the banker's real life and the game become more uncertain, hints of a large conspiracy become apparent. The Game was well received by critics like Roger Ebert and major periodicals like The New York Times, but had middling box-office returns compared to the success of Fincher's previous film, Se7en. The scene in which ... more on Wikipedia

The Game is ranked on...

The Game is also found on...