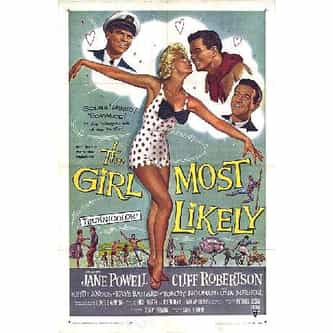 The Girl Most Likely

The Girl Most Likely is a musical comedy film about a young woman who ends up engaged to three men at the same time. The film, a remake of Tom, Dick and Harry, was directed by Mitchell Leisen, and stars Jane Powell, Cliff Robertson, and Keith Andes. The choreography is by Gower Champion. This was the last film produced by RKO Radio Pictures and was distributed by Universal-International. It was also the final film directed by Leisen. ... more on Wikipedia

The Girl Most Likely IS LISTED ON