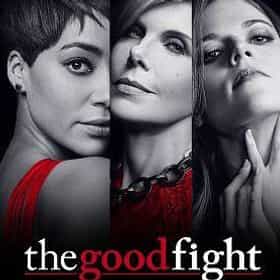 The Good Fight (CBS All Access, 2017) is a legal and political drama television series, a spin-off of the 2009 series The Good Wife. A year after the finale of The Good Wife, an enormous financial scam destroys the reputation of young lawyer Maia (Rose Leslie) and wipes out the savings of her mentor Diane Lockhart (Christine Baranski). The two are forced out of Lockhart & Lee and join Lucca Quinn (Cush Jumbo) at one of Chicagos pre-eminent law firms. ... more on Wikipedia

The Good Fight is ranked on...

#40 of 58 The Best New TV Shows With Gay Characters of the Last Few Years 9.7k VOTES As LGBT representation continues to be on the rise in media, many new television series feature prominent lesbian, gay, or b...
#109 of 119 The Best TV Shows Returning In 2020 12.2k VOTES The best TV shows returning in 2020 are a mix of long-awaited series finales, canceled shows that have been renewe...
#167 of 196 The Greatest TV Shows for Women 117.9k VOTES Behold, a complete list of the greatest TV shows for women, ranked by ladies who love to watch television! For stay-at-home ...
#130 of 134 The Best of Premium Cable TV Series 187.9k VOTES Best cable series on premium cable includes some of the greatest TV shows in history. This list of premium cable original pr...
#51 of 56 The Best Current TV Shows with Gay Characters 26.5k VOTES Gay characters on TV shows have come a long way since the days of All in the Family when a character named Steve shocked the...
#102 of 260 The Best Female-Led TV Shows 24.3k VOTES While society has by no means reached actual equality, in the last few years television viewers have started to see an uptic...
#60 of 66 Current TV Shows with the Best Writing 33k VOTES This list of current TV shows with the best writing ranks all the series that are sure to impress and entertain audiences. F...
#15 of 43 The Best Serial Legal Dramas of All Time 7.2k VOTES The best serial legal dramas of all time include some truly outstanding law-related TV shows. Many of the law dramas listed ...
#11 of 34 The Best New Shows of the Last Few Years That You've Been Missing Out On 595 VOTES Sometimes, the TV shows everyone should be watching don't exactly hook a huge audience right away. Underrated TV shows may b...
#1 of 41 What to Watch If You Love 'The Good Wife' 270 VOTES If you just finished The Good Wife and feel like it’s left a gaping hole in your life, there’s no need to despair. We’ve com...
#21 of 47 The Best 2019 Shows With Female Casts 994 VOTES We currently live in the Golden Age of Television. Part of what makes TV great today is diversification, and that's apparent...
#35 of 110 The Best Legal TV Shows 8.8k VOTES Lawyers! Judges! Criminals! Verdicts! These are the very best legal shows on television, ranked from best to worst. This lis...
#22 of 33 The Best Spin-Offs of the 2010s 497 VOTES Spin-offs have always been a huge part of television programming, and with the rise of Peak TV in the 2010s it seems there's...
#7 of 28 The Best Legal & Courtroom TV Shows of the 2010s 139 VOTES These are the best 2010s legal TV shows, ranked from best to worst by user votes. The best 2010s legal TV shows find drama i...
#4 of 8 The Best Current CBS All Access Shows 16 VOTES These are the best current CBS All Access shows airing new episodes in 2019, ranked by user votes. An over-the-top subscript...