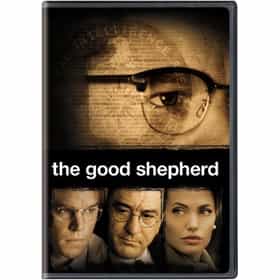 The Good Shepherd is a 2006 spy film produced and directed by Robert De Niro and starring Matt Damon, Angelina Jolie and De Niro, with an extensive supporting cast. De Niro also produced it with James G. Robinson and Jane Rosenthal. Although it is a fictional film loosely based on real events, it is advertised as telling the untold story of the birth of counter-intelligence in the Central Intelligence Agency. The film's main character, Edward Wilson, is loosely based on James Jesus Angleton and Richard M. Bissell. This was Joe Pesci's first film appearance after his six-year hiatus from acting between 1999 and 2005. Eric Roth, the film's screenwriter, began to work on the project after ... more on Wikipedia

The Good Shepherd is ranked on...

The Good Shepherd is also found on...