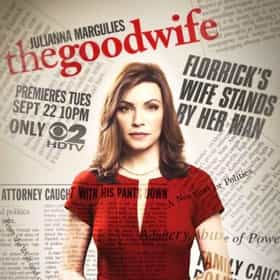 The Good Wife is an American television legal and political drama that premiered on CBS on September 22, 2009. The series was created by Robert King and Michelle King. It stars Julianna Margulies, Christine Baranski, Archie Panjabi, Matt Czuchry and Alan Cumming, and features Chris Noth in a recurring role. The current executive producers are Ridley Scott, Charles McDougall, and David W. Zucker. It is a heavily serialized show with many story arcs that also feature stand alone procedural story lines that are resolved or concluded by the end of each episode. The serial plots have been especially showcased in its highly praised 5th and 6th seasons. This is a rarity among The Good Wife's ... more on Wikipedia

lists about The Good Wife

The Good Wife is ranked on...

The Good Wife is also found on...