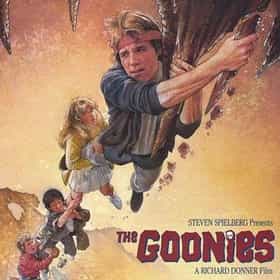 The Goonies is a 1985 American adventure comedy film directed by Richard Donner. The screenplay was written by Chris Columbus from a story by executive producer Steven Spielberg. The film's premise features a band of pre-teens who live in the "Goon Docks" neighborhood of Astoria, Oregon attempting to save their homes from demolition, and in doing so, discover an old Spanish map that leads them on an adventure to unearth the long-lost fortune of One-Eyed Willie, a legendary 17th-century pirate. ... more on Wikipedia

lists about The Goonies

The Princess Bride
Behind-The-Scenes Stories That Will Make You Want To Rewatch The Goonies 41.5k views "Hey, you guys!" There’s little doubt that The Goonies is one of the most beloved and best '80s movies. The 1985 f...
The Cast Of The Goonies: Where Are They Now? 114.9k views Many of us grew up with The Goonies, the movie about a ragtag bunch of kids from the Pacific Northwest who embark on an epic...
20 Goonies Trivia Facts Everyone Should Know 958.7k views When you think iconic kid's movies, you probably think The Goonies and when you think of '80s movies you also think The Goon...
Things You Have To Ignore In Order To Enjoy Watching 'The Goonies' 478.8k views Fat shaming and bullying. Racial stereotyping. Drug and sex abuse references. Assault, theft, and attempted murder. And that...
The Most Treasured Quotes From 'The Goonies' 239 votes Here is your map to the best quotes from The Goonies. This classic '80s movie is filled with funny lines, memorable one-line...

The Goonies is ranked on...

The Goonies is also found on...