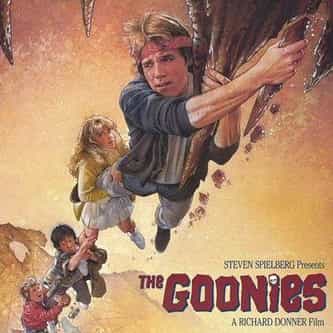 The Goonies is a 1985 American adventure comedy film directed by Richard Donner. The screenplay was written by Chris Columbus from a story by executive producer Steven Spielberg. The film's premise features a band of pre-teens who live in the "Goon Docks" neighborhood of Astoria, Oregon attempting to save their homes from demolition, and in doing so, discover an old Spanish map that leads them on an adventure to unearth the long-lost fortune of One-Eyed Willie, a legendary ... more on Wikipedia

lists about The Goonies

56.8k readers Behind-The-Scenes Stories That Will Make You Want To Rewatch The Goonies

507.5k readers Things You Have To Ignore In Order To Enjoy Watching 'The Goonies'

120.3k readers The Cast Of The Goonies: Where Are They Now?

263 votes The Most Treasured Quotes From 'The Goonies'

The Goonies IS LISTED ON