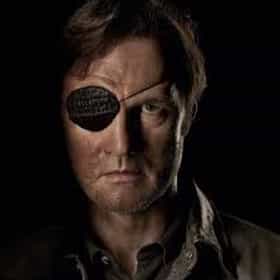 The Governor is a fictional character from the comic book series The Walking Dead, and is portrayed by David Morrissey in the television series of the same name. Created by Robert Kirkman and artists Charlie Adlard and Cliff Rathburn, the character made his debut in The Walking Dead #27 in April 2006. A primary antagonist of both series, the Governor is the seemingly charismatic leader of Woodbury, Georgia, who is revealed to be a brutal, insane leader that comes into conflict with protagonist Rick Grimes. The Governor is responsible for several deaths of primary characters in both forms of media. The character's origins are explored in the novel The Walking Dead: Rise of the Governor, ... more on Wikipedia

The Governor is ranked on...

#24 of 69 The Best Walking Dead Characters, Ranked 615.9k VOTES Who is your favorite character on The Walking Dead TV series? With season ten of this awesome drama series already bein...
#707 of 1,608 The Greatest TV Characters of All Time 1.2M VOTES List of TV's most memorable characters, of all time, chosen by the Ranker community. What makes a character live on in the p...
#327 of 818 The Most Annoying TV and Film Characters Ever 1.5M VOTES You know them. You hate them. Honestly, who knows why these characters even exist. Did someone think they were funny? M...
#9 of 50 The Fictional Leaders You'd Most Like to Behead 11.5k VOTES A list of fictional leaders who you’d most like to behead. Do you know of some fictional kings, queens, princes, or politici...
#11 of 19 The Craziest Comic Book Characters, Ranked 16.2k VOTES You almost have to be insane to be a comic book villain. They concoct grandiose schemes despite numerous failures, only to f...
#2 of 15 The Best Villains on The Walking Dead 20.7k VOTES The Walking Dead is filled with many different kinds of characters. Some are good guys, some are bad guys, but most are deep...
#7 of 29 The Most Memorable Sociopaths In TV History 550 VOTES Get ready to feel manipulated as we rank the greatest and most memorable sociopaths in TV history. Sociopathic characters ma...