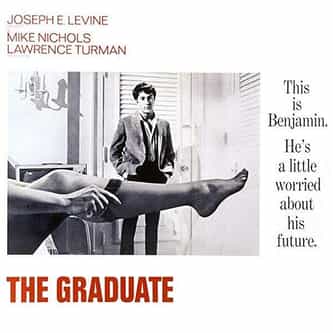 Tagline
This is Benjamin. He's a little worried about his future.

The Graduate is a 1967 American comedy-drama film directed by Mike Nichols. It is based on the 1963 novel The Graduate by Charles Webb, who wrote it shortly after graduating from Williams College. The screenplay is by Calder Willingham and Buck Henry, who appears in the film as a hotel clerk. The film tells the story of 21-year-old Benjamin Braddock, a recent college graduate with no well-defined aim in life, who is seduced by an older woman, Mrs. Robinson, and then proceeds to fall in ... more on Wikipedia

The Graduate IS LISTED ON