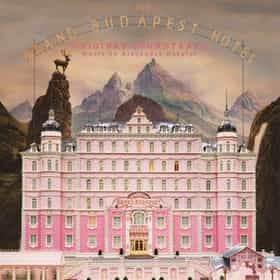 The Grand Budapest Hotel is a 2014 comedy film directed by Wes Anderson. The screenplay by Anderson is from a story by Anderson and Hugo Guinness, inspired by the writings of Stefan Zweig. It stars Ralph Fiennes as a concierge who teams up with one of his employees to prove his innocence after he is framed. The film is an American-German-British co-production that was financed by German financial companies and film-funding organisations. It was filmed in Germany. ... more on Wikipedia

The Grand Budapest Hotel is ranked on...

#621 of 673 The Most Overrated Movies of All Time 715.1k VOTES The most overrated movies of all time in one list, ranked in order of how overrated they really are. Being overrated doesn't...
#163 of 992 The All-Time Greatest Comedy Films 414k VOTES The best comedy movies of all time are listed here, in one convenient list to be voted on and ranked by true fans. Thes...
#9 of 162 People who voted for The Grand Budapest Hotel... also upvote Kevin Spacey on The Best Actors Working Today also upvote Edward Norton on The Best Actors Working Today The Best Movies of 2014 65.9k VOTES Sure there are the Oscars, Golden Globes, and a number of other award ceremonies that hand out trophies to movies that are v...
#348 of 6,100 The Best Movies of All Time 5.6M VOTES These are the best movies of all time, ranked by movie experts and film fans alike. What are the greatest movies of all time...
#134 of 582 The Greatest Film Scores of All Time 227.5k VOTES This list contains greatest movie themes and scores ever recorded, chosen by the Ranker community. (NOTE: This list is for f...
#323 of 1,203 The Absolute Funniest Movies Of All Time 1M VOTES The funniest movies of all time, ranked by fans. What are the funniest movies ever made? From Airplane! to The Jerk to The 4...
#72 of 264 The Best Ensemble Movies 16.8k VOTES The best ensemble movies feature an incredibly talented cast of actors and actresses, so much so that the cast overshadows e...
#270 of 710 The Best Movies Roger Ebert Gave Four Stars 160.2k VOTES List of movies Roger Ebert gave four stars, ranked best to eh. This is NOT a complete list of all of Roger Ebert's four star...
#153 of 207 The Best Adventure Movies 74.5k VOTES List of adventure movies. What are the best adventure movies? If you're a thrill-seeking, adrenaline-obsessed movie-goer, th...
#47 of 126 The Best Oscar-Winning Scores 9.6k VOTES What is best Oscar-winning musical film score? This list includes every film score that has won an Academy Award. Oscar-winn...
#9 of 47 The Most Hilarious Movies of 2014 7.9k VOTES From Kevin Hart and animated comedies to the return of Jim Carrey and Michael Keaton, 2014 featured some of the most hilario...
#8 of 13 The Most Delightful Bill Murray Cameos 256 VOTES Few actors can brighten your day just by showing up in a bit part, but comedy legend Bill Murray is surely one of them. Murr...
#17 of 23 Faux Paintings Featured In Popular Movies, Ranked 3k VOTES Art is subjective, even fictional art created as set dressing for a specific scene to highlight a character or situatio...
#34 of 43 Movies You Have to Watch Twice to Get Every Joke 8.9k VOTES The most rewatchable comedy movies are just as smart as they are funny. They're epic comedies packed with so many great bits...
#3 of 8 Rank the 2015 Best Picture Oscar Nominees 2k VOTES For the 2015 Oscar nominations, the Academy of Motion Pictures Arts and Sciences selected eight films to vie for the Best Pi...
#33 of 191 The Greatest Movies Of The 2010s, Ranked 25.6k VOTES You have a very important task ahead of you - voting for the best movies of the 2010s. While that may sound easy on the surf...
#26 of 123 The Best Comedy Movies Of The 2010s Decade 9.3k VOTES If you're in the mood for a good laugh, you're in luck because we want you to vote for the best comedy movies of the 2010s. ...
#25 of 53 The Best Bill Murray Movies 14.7k VOTES The best Bill Murray movies, ranked best to worst with movie trailers when available. Bill Murray got his start at Second Ci...
#64 of 131 The Best Dramas Movies Of The 2010s Decade 1.5k VOTES What are the best drama films of the decade? That's what this list will determine, based on your votes. We want you to choos...
#99 of 341 The Best Movies All Hipsters Love 104.7k VOTES Grab your mason jars, mustache comb, and ironic glasses, it’s time to rank the most hipster movies of all time! As any self-...
#22 of 81 The Best Winter Movies 6.9k VOTES Some of our favorite memories take place in winter. From the first winter holidays, to the first snow fall of the year, and ...
Behind the Scenes Stories of Famous Props 1.4M VIEWS Film props are not just randomly placed objects on a movie set. Many props hold significant meaning and add to the theme of ...
#23 of 29 The Best Edward Norton Movies 4.8k VOTES Perhaps one of the greatest actors of this generation, Edward Norton has starred and co-starred in so many critically acclai...
#1 of 10 The Best Movies Directed by Wes Anderson 2.5k VOTES List of all movies directed by Wes Anderson ranked from best to worst with photos. Films directed by Wes Anderson are listed...
#2 of 33 The Best Comedy Movies of 2014 1.5k VOTES Do you like to laugh? Of course you do. Lucky for you, 2014 saw tons of top comedy movies hit theaters and the funny films l...
#16 of 31 The Best Léa Seydoux Movies 81 VOTES This list will determine the best Léa Seydoux movies. She has quite the filmography that is sure to grow after her ro...
Movies Where Famous Actors Only Show Up In The Opening Scenes 5.8k VIEWS To paraphrase John Doe from Seven, it's hard to get an audience's attention in the 21st century. What with pregnant women be...

The Grand Budapest Hotel is also found on...