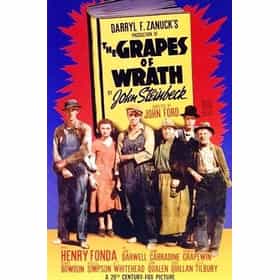 The Grapes of Wrath is a 1940 drama film directed by John Ford. It was based on John Steinbeck's 1939 Pulitzer Prize-winning novel of the same name. The screenplay was written by Nunnally Johnson and the executive producer was Darryl F. Zanuck. The film tells the story of the Joads, an Oklahoma family, who, after losing their farm during the Great Depression in the 1930s, become migrant workers and end up in California. The motion picture details their arduous journey across the United States as they travel to California in search of work and opportunities for the family members. In 1989, this film was one of the first 25 films to be selected for preservation in the United States ... more on Wikipedia

The Grapes of Wrath is ranked on...

#739 of 1,699 The Most Rewatchable Movies 3.3M VOTES There are some movies that I always stop at and watch if I see them on TV or I can put in the DVD player and watch when I'm ...
#55 of 6,114 People who voted for The Grapes of Wrath... People over 50 are 2x more likely to vote for this also upvote Smile on The Biggest Turn Ons in a Person The Best Movies of All Time 5.6M VOTES These are the best movies of all time, ranked by movie experts and film fans alike. What are the greatest movies of all time...
#63 of 347 The Best Movies Based On Books 136.3k VOTES List of the best movies based off books, voted on by cine-bibliophiles everywhere. Many movies are based off of books but wh...
#22 of 46 Every Single Movie On Rotten Tomatoes With 100% Approval, Ranked 45.8k VOTES There are more 100% fresh movies on Rotten Tomatoes than you might think. Sure, some people think Rotten Tomatoes is bad and...
#31 of 710 The Best Movies Roger Ebert Gave Four Stars 160.2k VOTES List of movies Roger Ebert gave four stars, ranked best to eh. This is NOT a complete list of all of Roger Ebert's four star...
#224 of 241 The Most Inspirational Movies Ever 46.7k VOTES This inspirational movies list, with videos, includes some of the most uplifting films of all time. Inspiring films do not c...
#65 of 145 The Most Utterly Depressing Movies Ever Made 41.2k VOTES These films are depressing, but they're also remarkable. After all, what's better than depressing movies when you need to si...
#19 of 318 The Best Political Films Ever Made 24.6k VOTES Political movies can approach the notion of politics and government from numerous perspectives, and with many wildly diverge...
#28 of 46 The Best Mother-Son Movies Ever Made 4.5k VOTES If you're looking for the best movies for mothers and sons to watch together, then look no further! The best mother-son movi...
#8 of 70 The Best Oscar-Nominated Movies of the 1940s 3k VOTES Picking the very best decade in Hollywood filmmaking is no easy task. But many film buffs will agree that the 1940s marked a...
#19 of 30 Movies Based On Books You Should Have Read In 7th Grade 525 VOTES Here is a list of all the movies based on books that you might have or should have read while in the seventh grade. Some of ...
#4 of 253 The Best Movies of 1940 3.7k VOTES List of the best movies of 1940, with movie trailers when available. These top movies of 1940 are listed by popularity, so...
#2 of 97 The Best Henry Fonda Movies 4.2k VOTES List of the best Henry Fonda movies, ranked best to worst with movie trailers when available. Henry Fonda's highest grossing...
#91 of 167 The Best Family Drama Movies of All Time 5.3k VOTES The best family drama movies represent a fun bonding experience for the entire family. What makes a good family drama? Typic...
#26 of 39 The Best Movies Based On History Novels 164 VOTES From the Trojan War to the Civil Rights Movement, film adaptations of historical novels combine fact and fiction. The b...
#5 of 23 The Best Movies About The Great Depression, Ranked 4.8k VOTES The Great Depression was a difficult time in American history so it's no surprise there are a lot of films are based on the ...
#7 of 146 The Best Movies Directed by John Ford 3.5k VOTES List of all movies directed by John Ford ranked from best to worst with photos. Films directed by John Ford are listed here ...
#4 of 100 The Best John Carradine Movies 892 VOTES List of the best John Carradine movies, ranked best to worst with movie trailers when available. John Carradine's highest gr...

The Grapes of Wrath is also found on...