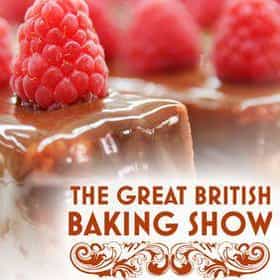 The Great British Bake Off

The Great British Bake Off (also called Bake Off or GBBO) is a British television baking competition, produced by Love Productions, in which a group of amateur bakers compete against each other in a series of rounds, attempting to impress a group of judges with their baking skills, with a contestant being eliminated in each round, with the winner being selected from the contestants who reach the finals. The show's first episode was aired on 17 August 2010, with its first four series broadcast on BBC Two, until its growing popularity led the BBC to move it to BBC One for the next three series. After its seventh series, Love Productions signed a three-year deal with Channel 4 to produce ... more on Wikipedia

lists about The Great British Bake Off

The Great British Bake Off is ranked on...

#529 of 780 The Best TV Shows to Binge Watch 1.2M VOTES Bored? Not anymore! These are the best TV shows for binge-watching. The greatest television shows in the world are ranked he...
#14 of 30 20+ Current British TV Shows You've Been Missing This Whole Time 7.9k VOTES If you're an Anglophile at heart, this list of under the radar British TV series is for you. Everyone's heard of shows like&...
#9 of 21 Current TV Shows That Basic Bitches LOVE 8.6k VOTES Basic bitch shows are popular for a reason - they're usually about romance, they feed our universal craving for drama, and...
#289 of 348 Popular Things You're Just Not Interested In 184k VOTES Face it, when it comes to solid taste, majority doesn't always rule. It's time to take a good long look at popular thin...
#9 of 25 The Best Current Reality Shows That Make You A Better Person 282 VOTES While traditionally pigeonholed as a trashy genre, there is plenty of current reality TV with substance. Whether it's learni...
#16 of 52 The Best Feel-Good TV Shows 3.6k VOTES You’ve had a bad day and just want to put the TV on and forget your troubles. These positive TV shows should do the trick. M...
#4 of 24 The Best Current Shows You Can Watch With Your Mom 1.1k VOTES The next time you find yourself going home for the holidays or popping over for Mother's day, it's never a bad idea to have ...
#15 of 42 Reality Shows That Involve Actual Skill 10.4k VOTES Ever come across one of those reality shows that you found strangely addicting, whether or not you’re tend to love or hate r...
#83 of 131 The Best Reality Competition Series 73.9k VOTES The best reality TV competition series, ranked by fans and critics. Reality shows are among the most-watched programs on TV,...
#5 of 43 The Most Watchable Cooking Competition Shows 22.9k VOTES The best cooking competition shows, hosted by some of television's most entertaining celebrity chefs, have become one of the...
#1 of 29 The Very Best British Reality Shows, Ranked 1.7k VOTES Reality programs have become a favorite genre among UK viewers and television fans around the world. The top British ...
#6 of 17 The Very Best British Talent Shows, Ranked 895 VOTES Talent shows allow everyday people to become superstars in any number of fields. The top British talent shows find contest...
#4 of 25 Current Reality Shows You Wish You Were On 957 VOTES Reality television can be a weird thing. In many cases, being the star of a reality TV show puts the stars under heavy scrut...
#7 of 33 The Best Competition Reality Shows On Netflix 2.9k VOTES Here are the best competition reality shows streaming now on Netflix. Whether you're looking for cooking competitions or sho...
#11 of 28 The Best Original Netflix Christmas Movies And TV Specials 346 VOTES It's time to get in the holiday spirit with the best Netflix Original Christmas movies and TV specials. Netflix has bee...
#42 of 66 The Best Shows on Netflix to Watch When You're Stoned 4.2k VOTES Sometimes a weekend is less "Netflix and chill" and more that you are feeling pharmaceutically chill (in places wh...
#6 of 93 The Best TV Shows Returning Fall 2018 6.6k VOTES Along with new series premieres, the best TV shows returning fall 2018 offers too many great choices for binge-watching ente...
#1 of 9 British Reality TV Shows That Far Outshine American Shows 876 VOTES The United Kingdom: land of monarchs, afternoon tea, and refined manners. But it's also the home of English reality televisi...
#32 of 34 What to Watch If You Love 'Chopped' 0 VOTES Every episode of Chopped kept viewers on the edge of their seats with one of the most intense cooking competitions ever...
#23 of 29 What to Watch If You Love 'Late Night with Jimmy Fallon' 51 VOTES Wondering what to watch after Late Night with Jimmy Fallon? If the friendly, funny vibe of the series has you hungry for mor...
#8 of 60 The Best Reality TV Shows In 2019 2.7k VOTES UPDATED: Check out The Best Reality TV Shows of 2020! Not only are there lots of new reality TV shows premiering...
#25 of 84 The Best Reality Shows Currently on TV 45.9k VOTES What are the best reality shows on right now ? Are you a Real Housewives faithful or are you totally into reality shows set ...
#8 of 32 The Most Comforting TV Shows In 2019 452 VOTES The next time you're looking to wind down after a long day then look no further than this list of the most comforting shows ...
#2 of 29 The Most Relaxing TV Shows In 2019 309 VOTES Looking for the best 2019 relaxing series? Sure you are. Because there really are some nights when everyone needs to just li...
#17 of 183 The Best BBC Television TV Shows 7.3k VOTES List of popular BBC Television shows, ranked from best to worst. This list of the top current and cancelled BBC Television T...
#25 of 49 The Greatest Reality Shows of the 2010s 5.3k VOTES This decade saw the rise of reality TV as it became more niche and truly had something to offer everyone. From some great 20...
#11 of 99 The Best Cooking TV Shows of All Time 14.6k VOTES Here are the very best cooking shows on television, ranked from best to worst. Including shows from the Food Channel, B...
#2 of 18 The Best Baking Competition Shows Ever Made 496 VOTES It’s almost impossible to turn on a television these days and not find a reality television program of some sort, especially...
#4 of 29 The Best Food & Cooking Shows On Netflix 758 VOTES Here are the best food shows streaming now on Netflix. Whether you're looking for cooking competitions, chefs traveling...
#20 of 44 The Best Talent Shows Ever on TV 10.1k VOTES The best talent shows on TV can expose the world to hidden talent and give people new careers. For example, Susan Boyle beca...
#28 of 36 The Best Reality TV Shows in 2020 195 VOTES This list looks at the best current television reality shows that will be airing new episodes in 2020. Not only are there lo...