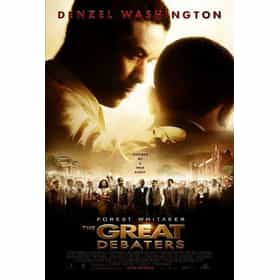 The Great Debaters is a 2007 American biopic period drama film directed by and starring Denzel Washington and produced by Oprah Winfrey and her production company, Harpo Productions. It is based on an article written about the Wiley College debate team by Tony Scherman for the 1997 Spring issue of American Legacy. The film co-stars Forest Whitaker, Kimberly Elise, Nate Parker, Denzel Whitaker, Gina Ravera, Jermaine Williams and Jurnee Smollett. The screenplay was written by Robert Eisele. The film was released in theaters on December 25, 2007. ... more on Wikipedia

The Great Debaters is ranked on...

The Great Debaters is also found on...