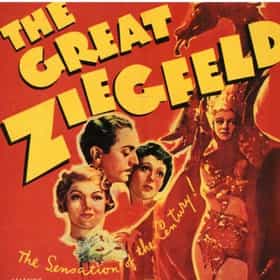 The Great Ziegfeld is a 1936 American musical drama film directed by Robert Z. Leonard and produced by Hunt Stromberg. It stars William Powell as the theatrical impresario Florenz "Flo" Ziegfeld, Jr., Luise Rainer as Anna Held, and Myrna Loy as Billie Burke. The film, shot at MGM Studios in Culver City, California in the fall of 1935, is a fictionalized tribute to Florenz Ziegfeld, Jr. and a cinematic adaption of Broadway's Ziegfeld Follies, with highly elaborate costumes, dances and sets. Many of the performers of the theatrical Ziegfeld Follies were cast in the film as themselves, including Fanny Brice and Harriet Hoctor, and Billie Burke acted as a supervisor for the film. ... more on Wikipedia

The Great Ziegfeld is ranked on...

The Great Ziegfeld is also found on...