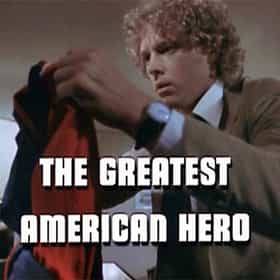 The Greatest American Hero is an American comedy-drama television series that aired for three seasons from 1981 to 1983 on ABC. Created by producer Stephen J. Cannell, it premiered as a two-hour pilot movie on March 18, 1981. The series features William Katt as teacher Ralph Hinkley, Robert Culp as FBI agent Bill Maxwell, and Connie Sellecca as lawyer Pam Davidson. The series chronicles Ralph's adventures after a group of aliens gives him a red suit that gives him superhuman abilities. Unfortunately for Ralph, who hates wearing the suit, he immediately loses its instruction booklet, and thus has to learn how to use its powers by trial and error, often with comical results. ... more on Wikipedia

The Greatest American Hero is ranked on...

#36 of 594 People who voted for The Greatest American Hero... also upvote Superman Franchise on The Best Superhero Movies Ever Made The Best TV Theme Songs of All Time 319.9k VOTES The best TV theme songs and TV intros of all time will take you back to some of the greatest moments in TV. Television theme...
#313 of 408 The Best TV Shows to Rewatch 131.6k VOTES List of the best TV shows to rewatch, as ranked by television fans and critics. When the weekend comes around and you can’t ...
#45 of 143 The Best Comic Book & Superhero Shows of All Time 84.6k VOTES List of the best superhero TV shows - only the greatest television series about superheroes in the history of the television...
#8 of 29 The Best "American" TV Shows 1.2k VOTES America! The red white and blue and television shows. That is the saying, right? In any case, there are lots of American TV ...
#42 of 510 The Best '80s TV Shows 202.5k VOTES List of the best television shows from the '80s, as ranked by television fans. In the 1980s, sitcoms were among the most tal...
#175 of 273 The Greatest Supernatural Shows of All Time 455.1k VOTES The very best supernatural shows on television, ranked from best to worst. Popular supernatural TV shows have been a staple ...
#44 of 103 The Best Comedy-Drama TV Shows Ever 19.5k VOTES The best comedy-drama TV shows, also known as dramadies, provide not only laughs but also heartfelt storylines. They have be...
#17 of 33 The Best 1980s Adventure TV Series 1.1k VOTES The 80s were about excess. And there is maybe no better way to prove that then the over-the-top adventures on 80s TV. So, he...
#3 of 17 The Best 1980s ABC Dramas 372 VOTES These are the very best 1980s ABC dramas, ranked by user votes. The best 80s ABC dramas are some of the flat out greatest sh...

The Greatest American Hero is also found on...