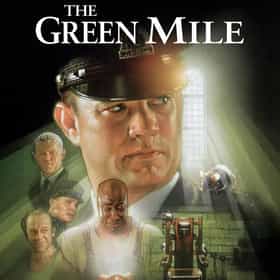 The Green Mile is a 1999 American fantasy drama film directed by Frank Darabont and adapted from the 1996 Stephen King novel of the same name. The film is told in a flashback format and stars Tom Hanks as Paul Edgecomb and Michael Clarke Duncan as John Coffey with supporting roles by David Morse, Bonnie Hunt, and James Cromwell. The film also features Dabbs Greer, in his final film, as the old Paul Edgecomb. The film tells the story of Paul's life as a death row corrections officer during the Great Depression in the United States, and the supernatural events he witnessed. The film was nominated for four Academy Awards: Best Supporting Actor for Michael Clarke Duncan, Best Picture, Best ... more on Wikipedia

The Green Mile is ranked on...

#48 of 1,699 The Most Rewatchable Movies 3.4M VOTES There are some movies that I always stop at and watch if I see them on TV or I can put in the DVD player and watch when I'm ...
#27 of 336 'Old' Movies Every Young Person Needs To Watch In Their Lifetime 1M VOTES If you're a younger millennial, you've probably heard your older friends and coworkers say things like "Hey, you g...
#110 of 6,106 People who voted for The Green Mile... also upvote Morgan Freeman on The Best Actors Working Today also upvote Tom Hanks on The Best Actors Working Today The Best Movies Of All Time 5.6M VOTES These are the best movies of all time, ranked by movie experts and film fans alike. What are the greatest movies in cinema h...
#197 of 672 The Most Overrated Movies of All Time 734.1k VOTES The most overrated movies of all time in one list, ranked in order of how overrated they really are. Being overrated doesn't...
#26 of 599 The Greatest Epic Movies Ever Made 279.7k VOTES Need some movie ideas? Check out this list of the best epic films of all time, which encompasses some of the best movie...
#4 of 292 The Top Tearjerker Movies That Make Men Cry 215.7k VOTES Some classic, well-loved films are classified tearjerkers, but would all sad, depressing movies make the manliest men cry? N...
#38 of 100 The Worst Oscar Snubs of All Time 45.7k VOTES Every year, the Academy of Motion Picture Arts and Sciences honors the very best in film - at least as they see it. It seems...
#1 of 14 14 Pretty Good Adaptations Of Stephen King Novels You Should Watch Right Now 7.6k VOTES Given his long and incredibly prolific career, it seems a pretty safe bet to call Stephen King the most successful popular w...
#10 of 114 Movies That Turned 20 in 2019 14.7k VOTES Take a trip down memory lane with this list of movies that turned 20 in 2019. Featuring epic war dramas, cult classics, well...
#9 of 59 The Best Movies Where the Bad Guy Wins 14k VOTES What is it that makes a psychological thriller even better than having an ending where the villain wins? Maybe it’s because ...
#12 of 50 The Best Oscar-Nominated Movies of the '90s 4.1k VOTES They've made you laugh. They've made you cry. And chances are, you know some of their dialogue by heart. These are the nomin...
#93 of 410 The Best Rainy Day Movies 176.6k VOTES For many, rainy days are no fun—but it doesn't have to be that way. A great way to spend such days is watching movies, ...
#22 of 90 List of Movies Like Inception 4.8k VOTES Looking for a list of movies that are similar to Inception? You're in luck, because all of the films listed below are re...
#10 of 39 Great Movies About Racism Against Black People 3.7k VOTES Movies about racism are some of the most emotional and dramatic films to ever hit the silver screen. The top black racism mo...
#2 of 60 The Best Movies for Heartbreak 4.3k VOTES The films on this list of the best movies for heartbreak have been ranked by the community and are sure to warm your heart a...
#12 of 31 31 Movie Trailers That Made You Weep 375 VOTES No, you’re crying! Any movie trailer that makes a person do the ugly cry is brilliant advertising. Trailers are made to get ...
#23 of 101 The Best Opening Movie Scenes of All Time 53.9k VOTES The best opening movie scenes of all time are those first sequences of iconic films that set the tone for the magnificence t...
#27 of 463 The Best Feel-Good Movies 436.6k VOTES Want to feel warm and fuzzy inside? This is a ranked list of the best feel-good movies that make us experience all the good ...
#21 of 64 The Best Movies That Are Pretty Smart, Too 6.1k VOTES No matter what kind of movies you're into, we can all agree intelligent movies can be a nice change of pace. Regardless of g...
What Stephen King Has Said About The Movie Adaptations Of His Work 24.4k VIEWS Stephen King is a horror staple in both film and literary circles. More Stephen King books have been adapted into movies tha...
#2 of 202 The Best R-Rated Fantasy Movies 6k VOTES List of R-Rated fantasy movies, ranked from best to worst with movie trailers when available. This list takes the best R-Rat...
#2 of 53 The Best Movies About Redemption 3.5k VOTES Some of the most beloved movies of all time feature the theme of redemption. These are the stories that motivate us to hold ...
#1 of 12 The Best Doug Hutchison Movies 53 VOTES List of the best Doug Hutchison movies, ranked best to worst with movie trailers when available. Doug Hutchison's highest gr...
#2 of 31 The Best Barry Pepper Movies 587 VOTES List of the best Barry Pepper movies, ranked best to worst with movie trailers when available. Barry Pepper's highest grossi...
#2 of 59 The Best Patricia Clarkson Movies 640 VOTES List of the best Patricia Clarkson movies, ranked best to worst with movie trailers when available. Patricia Clarkson's high...
#2 of 75 The Best Castle Rock Entertainment Movies 525 VOTES List of Castle Rock Entertainment movies, ranked best to worst, including trailers, genres, and release dates. Castle Rock E...
EW.com's Spot the Anachronism in 10 Movies 3.7k VIEWS EW's 10 anachronistic films. These movies have characters or scenes that belong in an earlier time period. For the full arti...

The Green Mile is also found on...

List of All Fantasy Movies Famous Movies Filmed in Tennessee