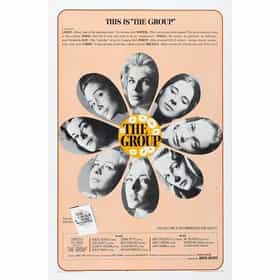 The Group is a 1966 ensemble film directed by Sidney Lumet based on the novel of the same name by Mary McCarthy about a group of female graduates from a Vassar-like college during the early 1930s. The cast of this social satire includes Candice Bergen, Joan Hackett, Elizabeth Hartman, Shirley Knight, Jessica Walter, Kathleen Widdoes, and Joanna Pettet. The film also features small roles for Hal Holbrook, Carrie Nye, James Broderick, Larry Hagman and Richard Mulligan. For its time, the movie touched on some controversial topics, such as free love, contraception, abortion, lesbianism and mental illness. ... more on Wikipedia

The Group is ranked on...

The Group is also found on...