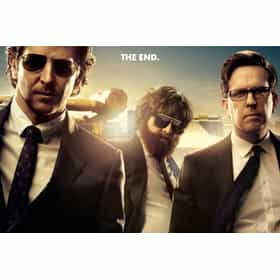 The Hangover Part III is a 2013 American comedy film produced by Legendary Pictures and distributed by Warner Bros. Pictures. It is the sequel to 2009's The Hangover and 2011's The Hangover Part II, and the third and final installment of The Hangover trilogy. The film stars Bradley Cooper, Ed Helms, Zach Galifianakis, Justin Bartha, and Ken Jeong. The supporting cast includes: Jeffrey Tambor, Heather Graham, Jamie Chung, Mike Epps and John Goodman with Todd Phillips directing a screenplay written by himself and Craig Mazin. The film follows the "Wolfpack" as they try to get Alan the help he needs after facing a personal crisis. However, things go awry when an incident from ... more on Wikipedia

The Hangover Part III is ranked on...