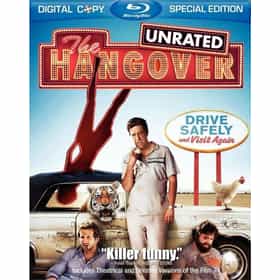 The Hangover is a 2009 American comedy film, co-produced and directed by Todd Phillips and written by Jon Lucas and Scott Moore. It is the first film of The Hangover trilogy. The film stars Bradley Cooper, Ed Helms, Zach Galifianakis, Heather Graham, Justin Bartha, and Jeffrey Tambor. It tells the story of Phil Wenneck, Stu Price, and Alan Garner, who travel to Las Vegas for a bachelor party to celebrate their friend Doug Billings' impending marriage. However, Phil, Stu, and Alan have no memory of the previous night's events and must find Doug before the wedding can take place. ... more on Wikipedia

The Best Quotes From 'The Hangover' 767 votes Released in 2009, The Hangover was the 10th highest-grossing film of that year, bringing in over $467 million. Once you read...
The Hangover Part III Movie Quotes 235 votes "The Hangover Part III" movie quotes bring the comedy film series fill circle with the third and final installment...

The Hangover is ranked on...

The Hangover is also found on...