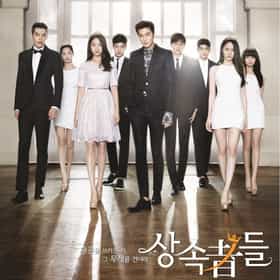 The Heirs, also known as The Inheritors, is a South Korean television series starring Park Shin-hye, Lee Min-ho, and Kim Woo-bin. Written by Kim Eun-sook, the trendy drama is set in a high school populated by the privileged and uber-rich. It aired on SBS from October 9 to December 12, 2013 on Wednesdays and Thursdays at 22:00 for 20 episodes. This was the first Korean drama co-produced by American digital distribution platform DramaFever and Korean production company Hwa & Dam Pictures. ... more on Wikipedia

The Heirs is ranked on...

#27 of 205 The Best Korean Dramas of All Time 852.5k VOTES As seen in the new and latest Korean dramas, there are always things to expect from K-dramas: The boy that you lov...
#12 of 128 The Best K-Dramas to Watch on Viki 171.5k VOTES Korean drama fans rejoice! You know that you can only watch a select few of the best Korean dramas on YouTube and they alway...
#13 of 66 The Best Korean Dramas to Watch on Netflix 163.9k VOTES The best thing about Netflix? Other than its wide selection of streaming Korean dramas to watch, there are no commercials an...
#900 of 1,328 The Best Guilty Pleasure TV Shows 19.5k VOTES List of the best guilty pleasure TV shows, past and present, including sitcoms, dramas, reality shows, and game shows. These...
#12 of 76 The Best Romance Shows On Netflix 43.1k VOTES Here are the best romance shows streaming now on Netflix. Whether you're looking for romcoms or romantic dramas, this list o...
#3 of 93 The Best SBS TV Shows 30.8k VOTES List of popular SBS shows, ranked from best to worst. This list of the top current and cancelled SBS TV series includes the ...