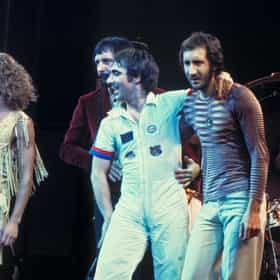 The Who are an English rock band formed in London in 1964. Their classic line-up consisted of lead singer Roger Daltrey, guitarist and singer Pete Townshend, bass guitarist John Entwistle and drummer Keith Moon. They are considered one of the most influential rock bands of the 20th century, selling over 100 million records worldwide. The Who developed from an earlier group, the Detours, and established themselves as part of the pop art and mod movements, featuring auto-destructive art by destroying guitars and drums on stage. Their first single as the Who, "I Can't Explain", reached the UK top ten, and was followed by a string of singles including "My Generation", ... more on Wikipedia

lists about The Who

Fascinating Facts You Didn't Know About The Who's 'Who Are You' 21.1k views The Who's 1978 album Who Are You is perhaps best known for the title track, a hit single for the group and later the theme s...
The Best Who Albums of All Time 2.4k votes The Who are rock legends who are widely considered among the best rock bands of all time. List of the best Who albums, inclu...
Every Song in Tommy, Ranked by Singability 835 votes Coming in on the tail end of a decade where revolution was ripe and spiritual transcendence felt like a tenable reality, the...
The Best Songs on The Who's Album Who's Next 378 votes The Who's Who's Next album could not have come at a better time in their career, with some of the tracks becoming their best...

#173 of 502 The Greatest Musical Artists of the '80s 576.4k VOTES   The greatest and most prolific artists of music's most colorful decade are remembered on this list. This list is ba...
#14 of 2,179 People who voted for The Who... People over 50 are 2x more likely to vote for this The Greatest Musical Artists of All Time 13.4M VOTES When VH1 polled fellow artists to name the greatest artists of all time, it seemed like a good idea---but in reality, the li...
#138 of 141 The Most Undeserving Members of the Rock Hall of Fame 434.7k VOTES The most undeserving members of the Rock Hall of Fame are all respectable and successful musicians and bands but quite simpl...
#10 of 133 Bands Or Artists With Five Great Albums 27.8k VOTES Building a successful band is tough but keeping it going is much tougher. Even some of history's biggest, best-selling ...
#6 of 333 The Greatest Classic Rock Bands 491.7k VOTES The greatest classic rock bands of all time embody the spirit of a generation of people who just wanted to rock. These top c...
#21 of 277 Rank the Rock N Roll Hall of Fame Inductees 311.8k VOTES Update: Follow Ranker's official New Rock 2020 playlist on Spotify! A complete list of bands and artists inducte...
#34 of 107 Which Bands Or Musicians Do You Most Want To See Before They (Or You) Kick The Bucket? 38.1k VOTES There's a certain energy associated with a live performance that just can't be replicated or synthesized by a single album. ...
#8 of 279 The Top Pop Artists of the 1960s 94.3k VOTES List of the best pop artists of the 60s, ranked. The 1960s may very well be the best decade for music in the rock era. Music...
#154 of 266 Celebrities Who Should Run for President 622.7k VOTES Which celebrity would you actually vote for if they ran for President of the United States? If you can remember all the way ...
#60 of 70 The Best Stoner Music 8.8k VOTES Whenever people sit back, light a fat one and want to chill on their couch, it's likely that they'll want throw on a great a...
#3 of 66 The Strangest Opening Act Bookings Ever 5.8k VOTES Some of the strangest opening act bookings no doubt leave music fans scratching their collective heads. Most of the time, an...
#10 of 100 Artists Who Have Inspired the Best Covers 16.5k VOTES Artists who have inspired the best covers include legendary musicians and bands like The Beatles, Bob Dylan and Jimi Hendrix...
#16 of 75 The Best Dadrock Bands That Are Totally Worth Your Time 23.9k VOTES The Urban Dictionary defines "Dadrock" as "classic rock you first heard from your dad's old re...
#6 of 409 The Best British Rock Bands/Artists 285.9k VOTES Of all the important rock bands to grace the stage, British bands are considered by many to be the most important and most i...
#50 of 318 The Best Progressive Rock Bands/Artists 164.8k VOTES Loved by many and hated by some, progressive rock - or prog rock - is one of the most popular subgenres of rock music. Meldi...
#9 of 295 The Best Ever Garage Rock Bands 19.3k VOTES Rock music, at its purest, rawest form is exciting, dangerous and energetic. That's why garage rock and garage rock bands re...
#10 of 74 The Best Acid Rock Bands of All Time 24.4k VOTES initially rising to prominence in the 1960s, acid rock became a harder, LSD-infused brand of psychedelic rock. What separate...
#4 of 39 The Best British Invasion Bands/Artists 4.7k VOTES British invasion artists list, with photos, ranked best to worst by votes. List of good british invasion bands includes a fi...
#3 of 76 The Best Rock Opera Bands/Artists 4.3k VOTES Rock opera artists list, with photos, ranked best to worst by votes. List of good rock opera bands includes a filter so you ...
Fire Away: The Worst Pyrotechnic Accidents Of All Time 3.3k VIEWS Kids are told, “If you play with fire you’re going to get burned.” Adults don’t always follow their own advice, especially r...
I Saw 100+ Bands In 2019 And Ranked Them 3.9k VIEWS Back in 2015, I unintentionally saw over 100 bands, triggering my inner ranking compulsion. My completist gene also cam...

The Who is also found on...