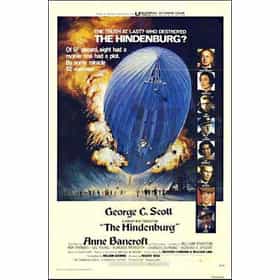 The Hindenburg is a 1975 American Technicolor film based on the disaster of the German airship Hindenburg. The film stars George C. Scott. It was produced and directed by Robert Wise, and was written by Nelson Gidding, Richard Levinson and William Link, based on the 1972 book of the same name, The Hindenburg, by Michael M. Mooney. A. A. Hoehling, author of the 1962 book Who Destroyed The Hindenburg?, also about the sabotage theory, sued Mooney along with the film developers for copyright infringement as well as unfair competition. However, Judge Charles M. Metzner dismissed his allegations. A highly speculative thriller, The Hindenburg depicts a conspiracy leading to the destruction of ... more on Wikipedia

The Hindenburg is ranked on...

The Hindenburg is also found on...