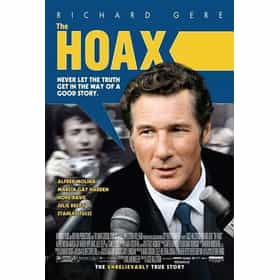 The Hoax is a 2006 American drama film starring Richard Gere, directed by Lasse Hallström. The screenplay by William Wheeler is based on the book of the same title by Clifford Irving and focuses on the autobiography Irving supposedly helped Howard Hughes write. Many of the events Irving described in his book were changed or completely eliminated from the film. The author later said, "I was hired by the producers as technical adviser to the movie, but after reading the final script I asked that my name be removed from the movie credits." ... more on Wikipedia

The Hoax is ranked on...

The Hoax is also found on...