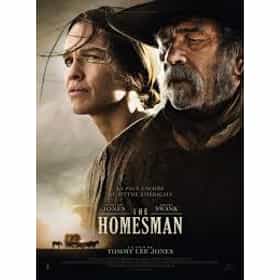 The Homesman is a 2014 American period drama film set in the 1850s midwest produced and directed by Tommy Lee Jones and co-written with Kieran Fitzgerald and Wesley Oliver, based on the 1988 novel of the same name by Glendon Swarthout. The film stars Jones and Hilary Swank and also features an ensemble cast that includes Meryl Streep, Hailee Steinfeld, John Lithgow, and James Spader. The film was selected to compete for the Palme d'Or in the main competition section at the 2014 Cannes Film Festival and received a North American limited release on November 14, 2014 by Roadside Attractions. The Homesman has received mostly positive reviews from critics. Rotten Tomatoes gave the film a ... more on Wikipedia

The Homesman is ranked on...

#29 of 60 The 30+ Best Modern Western Movies 8.7k VOTES The Western is a classic film genre full of grit, action, and life or death situations. While many of our favorite Western t...
#46 of 59 The Best Western Movies of the 21st Century 34.5k VOTES Featuring some of the greatest western films of all time, this is a list of best new western movies made after 2000. As...
#8 of 15 The Best Westerns Of The 2010s 365 VOTES From the early part of the 20th century through the 1960s, Westerns were one of the most popular genres of Hollywood movies....
#29 of 29 The Biggest Golden Globes Snubs of All Time 2.4k VOTES It used to be that the Golden Globes was a fairly accurate indicator for the Oscars. More and more, that’s not true as the t...
#34 of 54 The Best Movies No One Saw in 2014 9.5k VOTES Let's face it, nowadays there are so many movies in theaters that it's almost impossible to see them all. Add to that the fi...
#53 of 69 The Best Meryl Streep Movies 12.9k VOTES The best Meryl Streep movies, ranked best to worst with movie trailers when available. Meryl Streep's highest grossing movie...
#37 of 71 The Top 20+ Best Tommy Lee Jones Movies of All Time, Ranked 7.1k VOTES The best Tommy Lee Jones movies of all time prove that he’s one of the top actors currently active. Since the 1970s, he has&...
#11 of 15 Best Hailee Steinfeld Movies 545 VOTES List of the best Hailee Steinfeld movies, ranked best to worst with movie trailers when available. Hailee Steinfeld's h...
#27 of 44 The Best Recent Western TV Shows & Movies 1.8k VOTES While the Western genre isn't as well represented in either film or television as it was back in the mid-20th century, ...
#40 of 48 The Best Nebraska Movies 348 VOTES Which of these movies about Nebraska are the best? It's time to vote up the best movies set in the Cornhusker State. Some of...