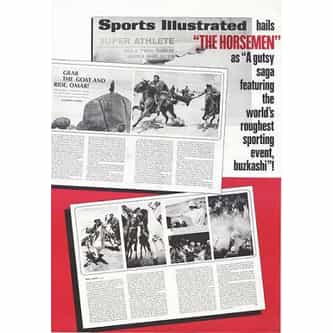 The Horsemen is a 1971 film starring Omar Sharif, directed by John Frankenheimer; screenplay by Dalton Trumbo. Based on a novel by French writer Joseph Kessel, Les Cavaliers shows Afghanistan and its people the way they were before the wars that wracked the country, particularly their love for the sport of buzkashi. Jack Palance plays Tursen, a renowned, retired buzkashi player, who is disappointed in his son Uraz. The film was filmed in Afghanistan and Spain. ... more on Wikipedia

The Horsemen IS LISTED ON