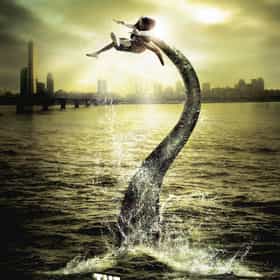 The Host is a 2006 South Korean monster film. The movie concerns a monster taking a man's daughter, and his attempts to rescue her. According to the director, his inspiration came from a local article about a deformed fish with an S-shaped spine caught in Han River. The Host had set a new Korean box office record by reaching 10 million tickets in just 21 days. In addition, it was ranked one of the top films of 2007 on Metacritic with a score of 85. ... more on Wikipedia

The Host is ranked on...

#570 of 770 The Best Horror Movies of All Time 1M VOTES Horror movies, ranked by adrenaline junkies worldwide. Anyone can vote on this CrowdRanked list, and can even add your own f...
#45 of 148 The Best Movies of 2006 10.4k VOTES A list of the best movies of 2006, from action movies like The Departed to comedies like Stranger Than Fiction. The '00s wer...
#61 of 116 The Scariest Giant Monster Movies 32.1k VOTES List of the scariest giant monster movies of all time, as ranked by monster movie aficionados and film critics. Ever since 1...
#12 of 14 Pretty Good Horror Movies That Will Make You Afraid To Go In The Water 942 VOTES Lakes. Rivers. Ponds. Oceans. Shallows. Seas. No matter the body of water, our cultural obsession with what lies beneath has...
#6 of 54 The Best Korean Horror Films 17.4k VOTES A list of the Best Korean Horror Films, voted on by scary movie fans like you. Are you wondering which Korean horror films a...
#23 of 25 The Scariest Asian Horror Films of All Time 9.4k VOTES In the past 20 years, Asian horror has emerged as a major force in the genre. While American horror stagnated, churning out ...
#22 of 23 23 Super Awesome Horror Movies On Hulu You Can Watch Right Now 1.2k VOTES The full moon is peaking from behind a cloud, a raven caws in the night, and you’ve spoken the wretched spell/logged into Hu...
#4 of 7 The Best Bong Joon Ho Movies 78 VOTES List of all movies directed by Bong Joon Ho ranked from best to worst with photos. Films directed by Bong Joon Ho are listed...
#53 of 177 The Best Monster Movies 7.6k VOTES The best monster movies are sure to give you a good scare, so if you’re looking for a good monster flick to watch next, this...
#94 of 162 The 100+ Best Action Movies for Horror Fans 1.1k VOTES Are you ready for some frightening action-packed movies? These scary action films are the best that the hybrid genre has to ...
#21 of 70 The Best Foreign Fantasy Movies, Ranked 1.6k VOTES If you're a fantasy junkie looking to expand your perspective, why not check out some of the best foreign fantasy films? Fan...
#30 of 55 The Best Monster Movies of the Modern Era 5.1k VOTES This list contains information on the best modern monster movies, ranked from best to worst by user votes. The best films ab...
#11 of 39 The Best Foreign Sci Fi Movies, Ranked 860 VOTES If you're a sci-fi fan looking to broaden your cultural horizon, check out some of these foreign sci-fi movies. Sci-fi ...
#226 of 233 The Best R-Rated Horror Movies 8.4k VOTES List of R-Rated horror movies, ranked from best to worst with movie trailers when available. This list takes the best R-Rate...
#19 of 31 The Best CGI Horror Movies 152 VOTES Most horror film enthusiasts are not big fans of CGI invading their genre; they would rather see filmmakers use good old fas...
#33 of 46 The Best Giant Monster Movies 6.1k VOTES A list of the best giant monster movies of all time. We believe we thought of them all, but if your favorite giant monster f...
#12 of 28 The Most Terrifying Asian Horror Movies On Shudder 40 VOTES Over the past twenty years, Asian horror films have taken over the genre. This list of Asian horror movies on Shudder puts m...
#10 of 37 The Best Monster Movies of the 2000s 1.1k VOTES As you’ll note on this list of the top 2000s monster movies, the longer a genre exists, the more liberties a filmmaker will ...
#8 of 30 The Best Monster Movies On Shudder 304 VOTES For just a few bucks a month, horror fans can get access to Shudder, one of the premiere streaming services on the internet....
Awesome Movies You Never Heard Of 25.4k VIEWS These are movies you may not have heard of, but should watch. Immediately. Because of the awesome.
#16 of 19 The Worst CGI Horror Movies 279 VOTES We live in a digital age where it’s simply much cheaper and more practical for a movie studio to use CGI. Not every use of c...

The Host is also found on...