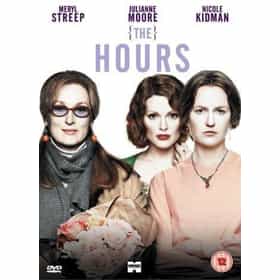 The Hours is a 2002 British-American drama film directed by Stephen Daldry, and starring Nicole Kidman, Meryl Streep, Julianne Moore, and Ed Harris. The screenplay by David Hare is based on Michael Cunningham's 1999 Pulitzer Prize-winning novel of the same title. The plot focuses on three women of different generations whose lives are interconnected by the novel Mrs Dalloway by Virginia Woolf. These are Clarissa Vaughan, a New Yorker preparing an award party for her AIDS-stricken long-time friend and poet, Richard in 2001; Laura Brown, a pregnant 1950s California housewife with a young boy and an unhappy marriage; and Virginia Woolf herself in 1920s England, who is struggling with ... more on Wikipedia

The Hours is ranked on...

The Hours is also found on...