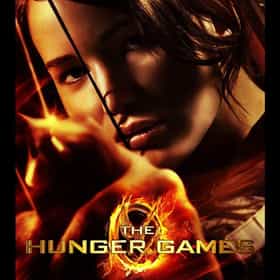 The Hunger Games is a 2012 American dystopian science fiction adventure film directed by Gary Ross, based on the novel by Suzanne Collins. In a dystopian post-apocalyptic future in the nation of Panem, which is divided into 12 districts, a boy and a girl from each district, between the ages of 12 and 18, must take part in The Hunger Games, a televised annual event in which the "tributes" of each district are required to fight until there is only one survivor. ... more on Wikipedia

The Hunger Games is ranked on...

#148 of 363 The Best Movies Based On Books 142.3k VOTES List of the best movies based off books, voted on by cine-bibliophiles everywhere. Many movies are based off of books but wh...
#761 of 1,699 The Most Rewatchable Movies 3.4M VOTES There are some movies that I always stop at and watch if I see them on TV or I can put in the DVD player and watch when I'm ...
#275 of 410 The Best Rainy Day Movies 178k VOTES For many, rainy days are no fun—but it doesn't have to be that way. A great way to spend such days is watching movies, ...
#2 of 78 The Best Film Adaptations of Young Adult Novels 59.9k VOTES List of best movies based on young adult literature written by some of the best young adult writers. These films were all in...
#356 of 581 The Greatest Film Scores of All Time 231.7k VOTES This list contains greatest movie themes and scores ever recorded, chosen by the Ranker community. (NOTE: This list is for f...
#1 of 12 The Most Apocalyptic YA Dystopias Of The 2010s 249 VOTES There were several depressing dystopias in 2010s young adult fiction that were adapted for film or television, each of ...
#13 of 15 Things Movie Adaptations Had To Leave Out Because They Were Too Dark 60.8k VOTES This article contains movie and book spoilers. The next time you leave a movie theater having watched an&nbs...
#2 of 21 The Most Quotable Movies Of The 2010s 854 VOTES What makes a movie quotable? Is it the broad appeal of the script's jokes - like every line in Bridesmaids? Or is ...
#12 of 22 22 Insanely Cool Pictures Of Abandoned Movie Sets 143.6k VOTES Sometimes, Hollywood doesn’t clean up after itself. For fascinating proof, look no further than these creepy and cool photos...
#4 of 13 Other Guys From Movies Who Never Should Have Lost The Girl 911 VOTES Sometimes, movies just end the wrong way. More specifically, the lead sometimes rides off into the sunset with the wrong per...
#4 of 14 14 Villains Who Messed Up Their Own Plans By Monologuing 1.3k VOTES What is it with villains and monologues? No matter how certain their success is, how close they are to tasting victory, they...
#3 of 21 20+ Great Movies Where People Have to Fight to the Death 1k VOTES There are no higher stakes than a fight to the death. Whether it's hand-to-hand combat, a knife fight, or a duel with pistol...
#216 of 569 The Greatest Sci-Fi Movies of All Time 563.7k VOTES What are the greatest sci-fi movies of all time? Science fiction films are among the most popular movies in cinematic h...
#21 of 107 The Best Thrillers Of The 2010s Decade 6.8k VOTES What are the best thriller movies of the decade? That's what this list will determine with help from you. Below, you'll...
#262 of 735 The Greatest Action Movies of All Time 437.6k VOTES The greatest action movies of all time starring some of the best action stars to have ever fought on screen. The best action...
#36 of 153 The Best PG-13 Action/Adventure Movies 12.1k VOTES List of PG-13 action/adventure movies, ranked from best to worst with movie trailers when available. This list takes the bes...
#19 of 32 The Best Action Movies Based on Books 474 VOTES Reading may seem like a peaceful activity, but many of the best action films have been adapted from books. The bes...
#49 of 174 The Best Lions Gate Entertainment Movies List 2.9k VOTES List of Lions Gate Entertainment movies, ranked best to worst, including trailers, genres, and release dates. Lions Gate Ent...
#21 of 45 The Best Adventure Movies for 13 Year Olds 2.1k VOTES Adventure movies can take us to exotic locations and are always filled with action. If your tween has officially become a te...
#9 of 15 The Best Liam Hemsworth Movies 474 VOTES List of the best Liam Hemsworth movies, ranked best to worst with movie trailers when available. Liam Hemsworth's highest gr...
#23 of 30 The Best Movies for 13 Year Old Girls 262 VOTES No matter the generation, these films for thirteen year old girls will always remain timeless. She’s gone from tween to teen...
#14 of 42 The Best Sci-Fi Movies for 13 Year Olds 735 VOTES This list of sci-fi movies for 13 year olds finds the sweet spot. This list has movies that are edgier than say WA...
The Highest Grossing Movies of All Time 90.3k VIEWS The highest grossing movies of all time, here in all their cinematic and box office splendor. These top movies at the box of...

The Hunger Games is also found on...